Saffron isn’t something that you’ll find in every housewife’s stock. This is mostly because of its price ($7,000+ per pound), but also because not everyone is sure what to use it for and how it tastes.

Don’t get me wrong, saffron seldom appears in my dishes, but every so often, especially when I have friends around, I like to garnish my dinners with that orange-gold.

I recently made saffron-flavored rice for my cousin’s wife and him. She requested the recipe from me since she was unable to identify the ingredient that gives the rice its distinctive flavor. She was shocked when I revealed that it just required a tiny sprinkle of saffron.

You’re curious as to what saffron tastes like and whether the price is justified. Read on.

What is saffron and why is it so expensive? 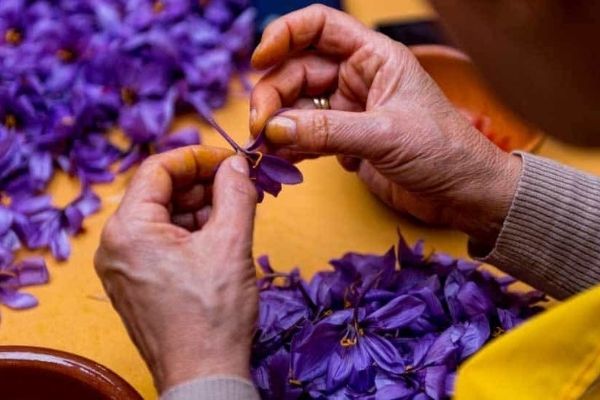 Saffron is a plant obtained from a flower called ‘Crocus sativus.’ Its price is dictated by the fact that the flower of each saffron plant has three stigmas, and a plant has only three or four flowers at a time. Also, the flowers must be hand-harvested, and since it is so delicate, it takes a long time to do that.

One pound of saffron is harvested from about 70,000 or more carefully collected flowers.

The collecting is not the end of the saffron-making process. The stigmas and styles (threads) of saffron are dried to be prepared for use.

Even after drying, saffron maintains its deep orange look.

What is saffron used for? The thing about saffron is that the flavor it gives to the dish varies depending on the way it is used and the quantity of it added at a time.

For example, for my risotto, I use about 30 threads for four servings, but when I want to add a subtle honeyed flavor to bread, I add 15 threads per pound of flour.

Generally speaking, it is pungent, but it tastes sweet. The highly sought-after spice has more than one tasting note.

It is honey-like, semi-sweet, floral, mushroomy, and musky. Because of that, it took only a pinch of saffron to give the extraordinary taste to the risotto I made for my cousin and his wife.

The quality of the spice you buy will also determine its taste. Some manufacturers mix saffron with paprika or other similar substances giving the food an odd flavor that only resembles real saffron a little bit.

To get the best possible taste, ask about the quality of the product you are purchasing, and avoid buying ground spice. It is always better to go with the whole saffron thread.

How to cook with saffron? There are two ways to cook with saffron. One is to use saffron powder, and the other one to add saffron threads to the meals.

Cooking with powder is significantly easier because you can just add it directly to the meal without the need of pre-soaking or toasting.

The powders dissolve easily and evenly throughout the meal. Personally, while I like the ease of use of ground saffron, I think saffron threads are far more superior.

Saffron threads can be added to the dish in two different ways:

What to cook with saffron? The thing with saffron is that everyone has a different opinion about its taste.

This is probably because it provides various flavors, and you will notice the one which is prevalent to you. So, you won’t know for sure, until you try it out.

Hopefully, this article has made the mystery of saffron taste a little bit closer to you. With the hints of how and for what to use, you are fully equipped to start cooking with edible gold.

Peanuts can be great and healthy snacks for you to munch, also allowing you to cook them to add to some of your meals. However, one thing you might be wondering is whether or not peanuts ever go bad or whether you can keep eating them safely for as long as they last. Technically, peanuts…

Have you ever given those café coffee mugs a beautiful makeover? They appear really stylish and classy. Your Instagram has a retro feel every time you take a photo with those mugs. To give your friends and family decaf coffee, you may easily have K-cups at home. When you are hosting a big event or…

Here’s a scenario that took place in my kitchen a couple of times: I had my mind set on preparing a particular dish, and I had all the ingredients it called for, except for one – Port wine. Port Wine Substitutes It got me thinking: How many of you have been in the same situation…

Making a good and tasty chili is not the easiest task. For me, the biggest problem I’ve come across while making chili is its insufficient thickness. How To Thicken Chili? A thin chili is disliked by everyone, especially in my family. Over the years, I developed a number of techniques for making my chili thick…

Beef broth can help you make a variety of dishes. If you find some leftover broth that you think might be a bit old, is it still safe to use it? Has it gone bad? There are several things you need to keep in mind, so let’s take a look at how long beef broth…

A few days ago, my friend came over, and while we were talking over coffee, she mentioned she’s planning a dinner party for a couple of her friends and, apparently, she was stuck. She came to me looking for some dinner menu ideas – all she knew was that she wants potato salad to be…