Ube and taro are two distinct tubers, despite the fact that they may seem quite similar.

Home cooks sometimes confuse the two due to their visual similarities. But in the kitchen, they are not interchangeable.

Ube and taro are, in truth, very unlike. They differ in terms of their place of origin, appearance, flavor, blending with other ingredients, and culinary use.

Continue reading for a thorough comparison of taro vs ube and the ideal preparation methods for each.

What is the main difference between the ube and the taro?

While they are both tubers, the ube is a sweet-tasting purple yam, while the taro has a pale lavender color and has a blander flavor.

The ube is used in sweet and savory dishes alike. The purple yam can be used for making different desserts such as cakes, jams, and ice cream. It is also perfect for making puree or roast veggie dishes.

The taro is more suitable for savory meals. But it is a main ingredient in the taro coconut tapioca recipe or can be used to prepare healthy smoothies.

Ube vs. taro – a detailed comparison 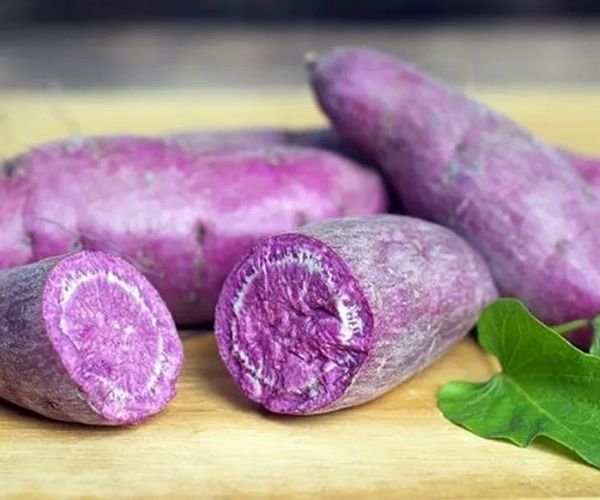 The appearance of the purple yam is easy to distinguish from that of the taro. The ube’s flesh can vary from white to saturated purple.

Once it is cooked, its color becomes even more intense. This provides the dessert or savory dish with a wonderfully vibrant purple color.

In fact, it is the color of the ube which makes it among the preferred ingredients by chefs and home cooks who want to create irresistible and colorful Instagram-ready dishes and desserts. 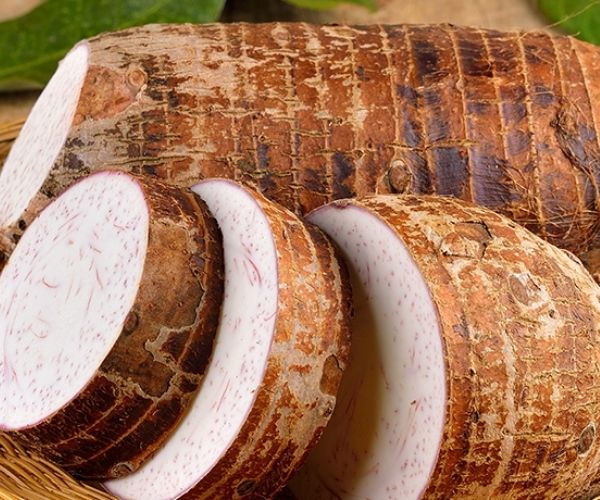 The flesh of the taro is much lighter than that of the ube. It can vary from white with purple specks to pale lavender.

When the flesh is grated or processed, the color of the taro develops a light purple hue. It is not as vibrant and intense as that of the ube.

Still, taro is a preferred ingredient in the Philippines and other countries. It is viewed as a healthier version for different desserts and sweet treats such as smoothies, ice cream, and tapioca.

The ube is an ancient tuber originating in Southeast Asia. Today, it is a common and essential food in the Philippines, where it is used for making various sweet and savory dishes.

Nowadays, the ube is cultivated in some parts of South America, Africa, Australia, and the USA.

The taro originated in India and Southeast Asia. Historical data proves that taro is among the first crops which our ancient predecessors cultivated.

Today, the taro is grown and has become a staple in the Caribbean, Hawaii, Southeast Asia, China, Africa, and the South Pacific.

The taro is grown in different varieties in Japan and is a popular ingredient for many different recipes.

The ube has a rich and sweet smooth flavor. While it does have a starchy feel like other tubers, it is not as suitable for savory dishes as the taro.

When it is cooked, the ube develops a slightly sticky, moist, and soft texture. This makes it very palatable and easy to eat.

The taro has a starchier and nuttier flavor that is earthier than that of the ube. It is pretty similar to that of a sweet potato.

Once the taro is cooked, its texture is soft but grainer and dryer than that of the ube.

In the Philippines, the ube is the main ingredient for prepping different desserts. This is due to its eye-catching vibrant purple color and its pleasant texture and flavor.

The purple yam can be paired perfectly with ingredients with more dominant tastes, such as cheddar or other cheeses.

One recipe which includes this combination is the ube cheese pandesal. It is a fluffy and soft bread roll with a cheese filling, with a sweet and salty taste.

The taro is not as sweet as the ube. It is earthier and nuttier in flavor with a gentle hint of vanilla. While you can still use the taro to make desserts, it is used more often as an ingredient for savory dishes.

It pairs well with different proteins, such as meat, poultry, or fish, and is delicious when roasted with them.

You can bake the taro stuffed with ground meat, veggies, or other stuffing. It is also well-paired with black sesame, matcha, red beans, and other Asian ingredients. 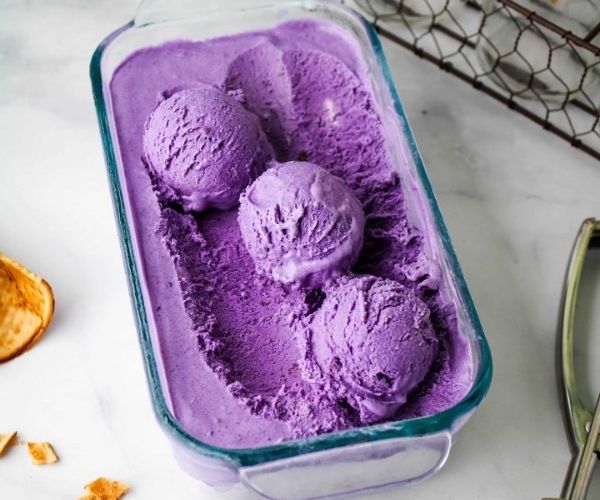 As mentioned previously, ube is a preferred ingredient for desserts. This is thanks to its bright purple color and its sweet, almost tropical flavor.

It is perfect as an addition or filling for different pastries or fried desserts.

The ube can also be used for making bread, cakes, cupcakes, puddings, pies, ice creams, and even some drinks.

Even though it has a sweet taste, the purple yam is sometimes included in savory dishes as well.

The taro is not as sweet. It has an earthy and nutty taste. The tuber is an excellent ingredient for making roast meat, and chicken for different casseroles, curries, soups, or stews.

Despite its milder taste, the taro too can be used as an addition to different desserts. It is suitable as a filling for pastries and dumplings, ice cream, cake frosting, or flavoring bread or tea.

While they are both tubers, the taro and the ube are pretty different. Each can be used to prepare sweet and savory meals. But due to their difference in flavor, texture, and appearance, it is not a good idea to use the two interchangeably.

The better one depends on your personal taste and the recipe you are planning to prepare.

If you are looking for a colorful and fun, sweet, and healthy addition to your desserts, then you should go for the ube. It will add intense purple color and nice sweetness to the cake, ice cream, or other dessert or beverage.

If you want a more versatile tuber for making savory dishes, then you should probably go for the taro. It is an excellent replacement for a regular potato for just about any dish.

Both the taro and the ube are starchy and are rich in carbs. This makes them perfect for those looking for a healthy carb load before a workout or a sports event.

Naturally, you should pick one of these two tubers, which is easier to find in your area.
Taro is readily available in more countries than the ube. In Japan and the Philippines, they are both pretty common.

If you have the chance, we recommend trying both the ube and the taro to decide which one you like better.

Want to bring your measuring skills to perfection? Then you surely want to know how many strawberries are in a cup. Stay with me today, and I’ll show you how to achieve that! How Many Strawberries In A Cup? Spring is here, and all I can think about is sweet and delicious Bisquick Shortcake –…

What better way to discover all the various foods out there than to follow an alphabetic order. Today, our focus is on letter S. Let the count begin! 1. Saffron Saffron is a rare spice and one of the most coveted in the world. It is derived from the flower of Crocus sativus and has…

It’s entertaining to test your knowledge by listing meals according to their initial letters while also learning about new items to add to your menu. We are now moving on to the letter M. Some of the most well-known meals that begin with this letter are listed below. 1. Macaroni A common type of dry…

The term “spaghetti squash” comes from the fact that when cooked, the squash’s flesh resembles pasta. So, it can be used as a gluten-free substitute for pasta. However, how long can it stay good? Spaghetti squash has a long shelf life. However, it can rot if not appropriately handled. Find out how long a spaghetti…

Nothing feels better than a fine aroma of baked Italian sausages spreading through your house. Do you agree? 🙂 How To Cook Italian Sausage in Oven? Don’t know about you, but my boys are huge sausage fans (they like it more than hot dogs). They are able to eat it almost five times a week!…

The busier someone is, the more they appreciate the small breaks in their daily schedule. Kids barely do anything, so they take their free time for granted, but for the working adult, lunch breaks and time off are sacred. Best Tea Maker Everybody has a favorite among the ideal snack-sized delights we’ve produced over the…