I am a dedicated housewife, and luckily I adore spending time in the kitchen and cooking for my loved ones. For me, therefore, it is hard to imagine that I will ever find myself missing a piece of kitchen equipment to finish my meal. I have had some mishaps in the past, of course.

After all, I am only human. But, after baking so many cakes and pastries and preparing numerous meals, appetizers, and desserts, I think I have already overcome most of the problems and disasters that can occur in the kitchen.

My experience has taught me a lot, and I am ready to share it with the world. You name it, and I’ve done it.

For example, on one occasion, I have found myself helping my single friend impress a girl on their first date. He wanted to cook for her (he really liked her a lot) and had a dessert problem.

Namely, his idea was to make her a blueberry pie. He had made some basic pasta for the main course and was pretty successful at that, I must admit, but the rolling pastry was way out of his league.

Of course, I have agreed to help as it was a routine for me, but halfway through the process, I found out that he did not own a rolling pin! It was quite logical when I think about it now. In fact, a rolling pin in a bachelor pad would be quite a miracle!

But, we had a problem, how could one roll pastry without the rolling pin?

Luckily, we were both creative young people and came up with quite a few rolling pin substitute ideas in no time. Read on to be inspired as well!

When I asked my friend for a rolling pin, his first reaction has been total confusion: “Rolling what?”

Obviously, not everyone knows what a rolling pin is. To be frank, where would someone (especially a man) who lives alone and buys his pastry in the bakery ever seen the rolling pin. I even know some modern mums that have never baked at home- they simply have a different lifestyle.

Although I am not judgmental, I have to say that the rolling pin is a must for anyone who wants to be a baker.

Well, it is a tool you simply have to own if you want to roll, shape, or flatten your dough.

The rolling pin actually has quite a long history of use. It was first used by the Etruscans who had lived in the area we now know as Italy. This ancient civilization thrived from the 8th to the 3rd century B.C and obviously had a thing for baked goods.

It is believed that they used the first rolling pins to make bread from the grains they grew. The Etruscans actually invented some other cooking tools besides the rolling pin as well.

Their rolling pin only resembled the one that we use today. Our modern rolling pins were actually designed by a man named J.W. Reed in the late 19th century.

Modern rolling pins are rather versatile as they need not only be used to roll out the dough. You can use a rolling pin to crush cookies, crackers, and nuts. It is not only called for in some great recipes but can also help you relive a lot of built-up stress!

Rolling Pin Substitute: Be creative wherever you are!

Although the rolling pin represents quite an essential piece of kitchen equipment, it does not mean that you cannot replace it when needed. Nothing is irreplaceable!

There are some common household items that can replace the rolling pin, and I am sure that you have at least one of them lying around in your house (If not all of them!): 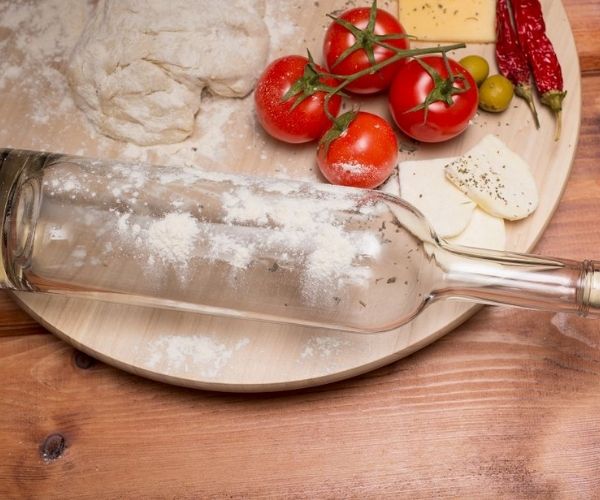 No matter if it’s red or white, a bottle of wine can come in handy when you are missing a rolling pin. It need not be full either, but it has to be closed securely.

You can wrap it in a cling foil to keep it clean, and, voila, you have yourself a functional rolling pin substitute.

If you do not have the foil, you can put the dough in between parchment paper – that will protect it from any bacteria or dirt from the wine bottle and prevent your dough from sticking onto the bottle.

When you are done, you can pop the wine open and enjoy a glass or two! 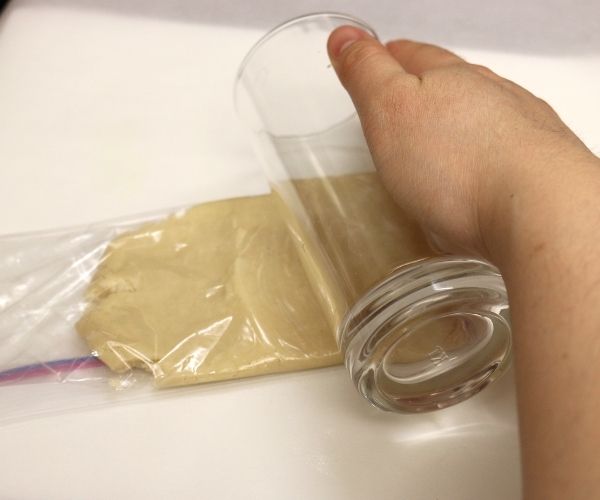 If you do not have a bottle of wine (which is highly unlikely), you can use a tall drinking glass instead. The glass has to have smooth sides and be heavy so that you can roll the dough smoothly and without cracking the glass.

Wash the glass well, or use the same trick with parchment paper. You can also spray the outside surface with oil for an extra smooth ride!

See also: Roll the dough for the most delicious pizza 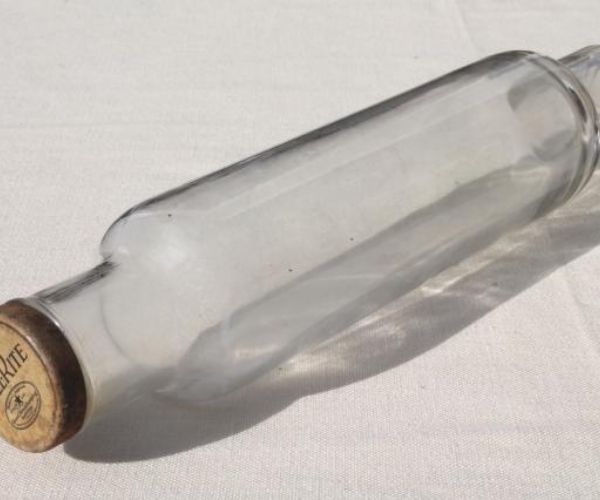 If you really cannot get a hold of a wine bottle and you do not own appropriate drinking glass, you are sure to have a water bottle. Water is a source of life and a driving force of all nature!

Joking aside, you can use both plastic bottles and stainless steel ones. I recommend the latter. Stainless steel bottles are more sturdy and sleek, but you can freeze the water in a plastic bottle for a similar effect. Frozen water will be heavier and thus better at its substitute role for a rolling pin.

If you cannot stand the icy bottle and your hands start to ache, use your winter gloves! It might look silly, but you will get the job done!

Although highly unhealthy, soda cans are found in most American homes. If you are in need of a rolling pin substitute, that is good news!

An unopened soda can is sturdy and sleek enough to help you flatten your dough. An empty one is of no help, though, as it will most likely collapse under the pressure.

This is actually the idea we ended up using at my friend’s house, and it worked just fine. We used some plastic wrap to sandwich the dough and thus kept the bacteria off of it.

The blueberry pie came out swell, it was a success! Unfortunately, I cannot say that for the date, but the story does have a happy ending- my friend soon met his wife to be, and they lived happily ever after (or at least up to now!).

You have to agree that these are some great rolling pin substitute ideas. We had some more, such as a dowel or a PVC pipe, but we could not get hold of those items.

Therefore I think that these four rolling pin substitutes I have listed here are the most practical ones. These items are most probably already in your kitchen, and all you need to do is reach for them!

Do not miss out on the part where you use cling foil, plastic wrap, or parchment paper, or you will risk contaminating your food. Believe me, you do not want that!

Feel free to vote on the best rolling pin substitute! I am interested in finding out what you think!

Maybe you have some additional ideas or tips. If so, please share your thoughts in the comments!