Pork chops are split into a number of categories. The bigger cuts, such as the ham, pig loin, pork belly, and hog shoulders, are typically offered wholesale. Smaller parts are cuts from the four principal sections that are offered at butcher shops and supermarket stores. These include, among many others that will be discussed in this article, the pork butt, the picnic shoulder, the collar, spare ribs, and jowls.

The majority of the soft flesh in a pork primal is always found towards the top, while the harder meat is found at the bottom. This is due to the fact that the lower parts of the hog often have a higher concentration of pork muscles. However, when cooked properly over low, constant heat, they may provide delicate, soft steaks. The slices of pork that are most frequently found at the butcher shop are described in this article.

Pork loins form the most expensive cuts of a hog’s carcass. Meat cut from this area is tender, very lean, and has uniform fat marbles. Pork loins are normally cut from the top of the animal or the area around its rib cage. They can be cut from end to end into smaller pieces of bone-in pork chops and boneless pork chops.

Tenderloins are also pulled out from the rear part of the carcass. They’re often sold intact in retail butcheries or grocery shops as marinated or flavored pork tenderloins. They’re preferably cooked under high heat within a short period. Otherwise, they’ll get tough and chewy. This is because they constitute the most tender part of pork meat. Recommended cooking styles for tenderloins include pan-frying, sear-roasting, grilling, and broiling.

The baby’s back rib, also extracted from the pork loin, is cut from the boneless top point of the hog after the tenderloins have been removed. There’s also fatback on the upper part of the loin which is usually used to make lard and salt pork. It can also be added to sausages and ground pork.

Other sections of the pork loin include the blade end, sirloin, and the center portion. The blade end is fatty and is nearest to the pork’s shoulder. Sirloin is cut near the rump and has more bones. The center portion forms the middle section. It is lean, tender, and costlier compared to the blade and sirloin portions.

This makes up the lower section of the hog’s carcass. It’s highly concentrated with pork fat thus it’s common to use in making bacon and pancetta. It’s also a little tougher than pork loins making it a cheaper option. It’s a common recipe in Eastern cuisines and barbecues.

These are like spare ribs but are leaner and much easier to slice and serve.

The pork belly is where we get all the bacon. The meat is cured with salt, sugar, or maple flavor then smoked after which it’s sliced into bacon.

It also makes up all the cheap cuts of pork you’ll find in a butchery. It’s versatile and currently popular in many restaurants. You can slice then roast it, borne, stuffed, rolled, whichever variation you’d like.

The pork shoulder is subdivided into two main parts, the pork butt, also known as the Boston butt, and the picnic shoulder. The Boston butt consists of the neck, shoulder blade, and upper limb of the pig. It can be bought whole on retail with its bone intact or boneless. It can also be sliced and sold as pork shoulder steaks or blade steaks in grocery stores and butcheries. You can smoke it, roast it, or cook it in an oven or shred it for barbecue. They make great stew recipes and can also be braised. The pork butt has more marbles of fat and has a uniform shape.

The picnic shoulder is just below the pork butt and is a little bit tougher. This is due to higher muscle concentration. It also has fewer fat marbles. It can be cured along with the pig’s skin and bone then sold as a smoked picnic shoulder. The skin and the bones can also be removed to make sausages and other lean products.

Another rare cut on the pig’s shoulder is the pork cushion, which forms the bottom part of the picnic shoulder. They’re also a tough piece of meat but can be pounded and cooked under low and steady heat to make them tender. You can slice them to make pork cutlets. 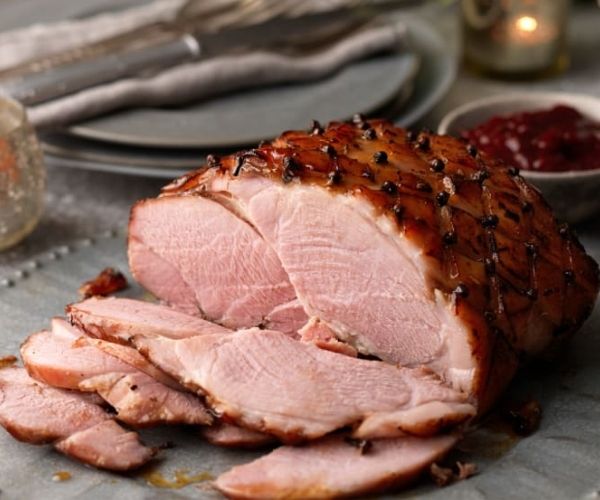 This cut forms the top part directly above the pork leg. This is a cut many would think is the pork butt but is not. It can be cut whole from around the hip bone or sliced at the center of the pork ham area. The whole ham, commonly referred to as fresh ham, has a significant amount of muscles and is covered in fat up to halfway up the leg. The center slice, also known as the “leg of pork steak” has the leg bone in it as well as the top, bottom and eye muscles.

Butchers prepare this part by first curing it with salt and some sugar then smoking it. It’s mostly sold whole as it is with trimmed skin and the bones in it. You can buy it for your family or friends for a Christmas party or Easter celebrations. The whole meat weighs about 17-20 pounds.

Most people don’t buy it whole. So most butchers cut it into its primary muscles that can be cured, smoked, and sold in smaller portions. They can be found in slices for sandwich making and marbles for preparing stew. They’re a major ingredient in Prosciutto and Jamon serrano. 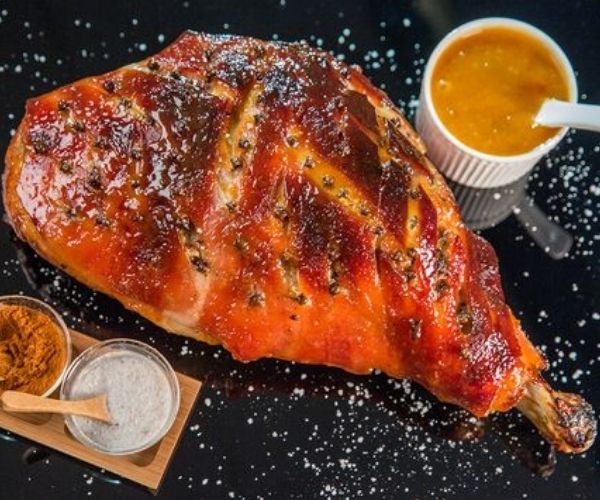 The pork legs, also known as pork hock, are cut out from the pig’s ankles. It contains lots of connective tissue and a larger section of it is made up of bones. When cut from the rare legs, they’re called pork knuckles or ham hocks. They’re common in Italian cuisines and come as thinly sliced prosciutto. The front legs or ham hocks are usually sold smoked or brined.

Pork legs are mostly used to prepare soups and added to stews. This is due to their high collagen content and they can be relied on as a source of gelatin. Pork legs may be tough but slow steady simmering softens their tough connective tissues making the meat nicely tender. They can be cured, smoked, and pickled. You’ll find them in Mexican dishes like Menudo. 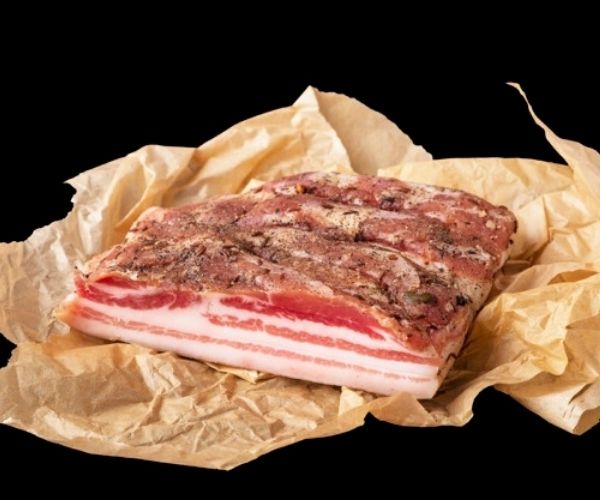 The fatback is cut from the back of the pig and as the name suggests, has a high-fat concentration. Hard fat can be chopped or ground and added as an extra ingredient in making pork sausages. They’re essential since they add moisture and flavored fat to sausages. This is due to their high water content. 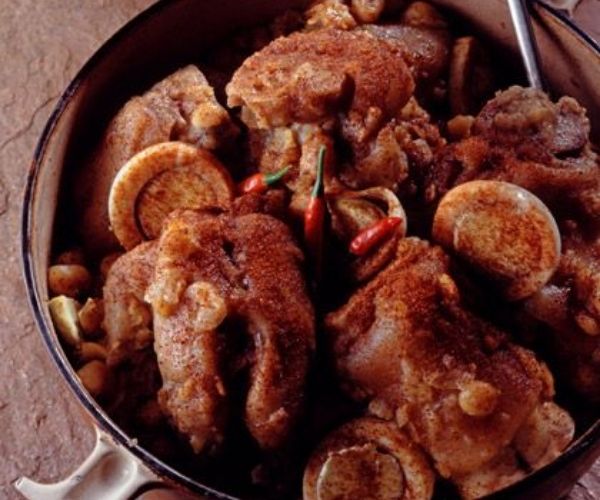 These are cuts made apart from the main sections of pork. They include the feet, knuckles, and the liver. They are quite tough as they also have lots of muscle tissue. Slow and steady heat would, however, help make them tender and usable in some recipes.

Pork liver is organ meat. They’re less popular compared to other animals’ livers due to their strong flavor. But they make up one of the main ingredients in Braunschweiger Leberwurst sausages.

This is a cut that’s always overlooked by pork-lovers in grocery stores. The cheek is cut from the hog’s cheek,  which is lean, moist, and has a very tender texture. It’s affordable, has a meaty flavor, and low-fat content making it a healthy kind of meat. They make great recipes when braised.

The Spanish Iberico pig cheek recipe and the Italian Guanciale are examples of recipes made out of pork cheeks.

Pork jowl is also a cut made out of the cheek but is a lot tougher. Its taste resembles a piece of thickly-cut bacon and is usually sold smoked and cured. You’ll encounter more of it during New Year’s Eve in the Southern regions of America such as Arkansas, Georgia, North Carolina, and Mississippi. The pork jowl is traditionally used to season bean and peas recipes in the New Year’s Day celebrations. 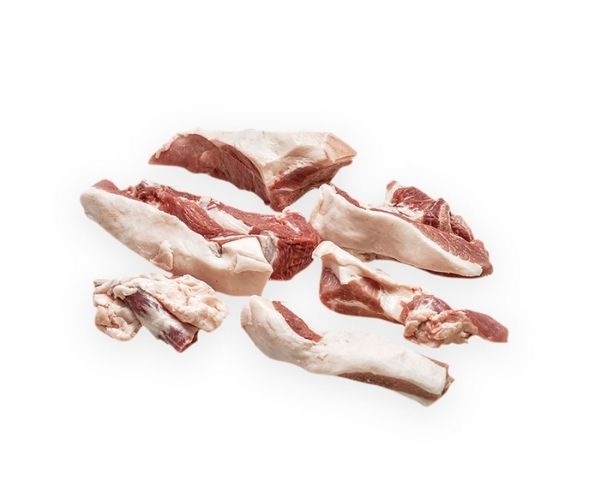 These are portions of pork left when all the larger sections of the carcass are cut off. They normally remain when the major pork sections are cut so their appearance may look square and uniform which can be sold to bacon manufacturers. They’re mostly used for making fresh and cooked sausages.

Pork cuts come in many variations that stem from the main sections which are the pork loins, belly, shoulders, ham, and legs. Each has different tender textures and varying amounts of fats. They all make a special ingredient based on individual pork characteristics. For example, the pork belly that makes most of your favorite bacon.

Pork loins consist of all kinds of expensive pork chops and the pork shoulder makes amazing barbecues. It’s, therefore, good to know the different types of pork cuts made in the butchery if you’d like to diversify pork recipes in your kitchen.