The Austin XL is a piece of grilling equipment manufactured by the reputable Pit Boss brand. It is a popular choice among pit masters who know their way around quality and affordable items.

The pellet grill can be used multi purposely for both smoking foods and grilling them.

Pit Boss Austin XL is an excellent purchase because it has so many respectable and appealing features. It is constructed to be 1,000 square inches in size, allowing you to smoke or grill substantial portions of delicious and mouthwatering treats.

The price of this barbecue model is another quality that sets it apart. The majority of well-known budget grills are of such poor quality that you wish you had spent the additional money for higher quality. The Austin XL grill, on the other hand, is a double package of goodness, so this is not the case. You can be sure that for a reasonable price, you’ll take home a grill that will last for a very long time and make you feel like your money was well spent.

You can read more about the Pit Boss Austin XL barbecue in our review. Along with its specifications, I’ll keep you updated on what other people are saying as they give it a thorough assessment. We’ll go into detail on additional factors like mobility, true cost, durability, space, and others to enable you to make more intelligent purchasing selections.

In terms of smoking performance, Pit Boss Austin XL smoker is equipped with high-temperature ranges. Whether slow smoking, searing, cold smoking, roasting, or cooking on an open fire, the heat can be adjusted to meet your preference.

An average of 52 burgers can be cooked on the equipment’s 1,000 square inches worth of cooking space. It is capable of handling foods that can feed large gatherings and also a wide variety of meals as a go.

It is constructed using a steel coating and designed sturdily, giving it enough strength to withstand the weight of foods cooked on it.

The smoker is leak-free since its parts are built to fit perfectly when assembled. In isolated cases of leaks, it can be sealed using gasket kits.

On the downside, assembling the smoker can be a challenge if you have not studied and understood the manual correctly. Some users complained of having issues with the ashtray and temperature control, all of which are easy to fix with the right instructions.

Our experts had a field day with the state-of-the-art smokeless design while running their tests on Pit Boss Austin XL. It’s not only easy to heat up but also creates smoke that is clear and clean. This is an advantageous feature as dirty smoke can affect the taste and quality of smoked food.

From our end, assembling the equipment’s parts was an easy and quick task. It was an effortless exercise as most of the parts are already assembled on arrival.

Austin XL is fitted with a side shelf made of stainless steel, meat grids, and a fire cup. An LED thermometer gauge is also part of the package in this grill’s design. Since it’s in-built, monitoring the temperature inside the grill is easy. It helps you know when to reduce and increase the heat as well as knowing when your food is ready.

For ease of usage and operation during your smoking and grilling, Pit Boss Austin XL is your go-to grill.

Here, we’ll be letting you in on all you need to know about the Pit Boss Austin XL smoker and grill. From its price and warranty, durability, grilling zone, portability, size, and build to other distinct features possessed by the equipment.

Before buying your Pit Boss Austin XL, you have to learn about its size and build, so that you can gauge it against your requirements.

The most noticeable feature of this grill is its large size. Its height ranges from 62 inches while its weight is 181 pounds. This limits its mobility. The good news is that it is fitted with wheels that make it easier to push around.

With the grill’s 1000 sq. inches worth of cooking area, we enjoyed working on it and experimenting with different types of food in the limitless cooking space.

It was easy to create more room for smoking and grilling by removing the side shelf. The porcelain coating on the cooking area makes it easy to clean and protects it from rust.

It’s clear that the brand manufacturers, Pit Boss, have enough faith in the grill. This explains the 5-year warranty attached to it as proof of its durability. The steel used in the making of Austin XL smokers is heavy-duty, adding to their prolonged life.

It has an effective fire cup. The wood pellets used in it are easily lit and gain heat in record time. Due to its versatility, it is capable of cooking slowly in low heat as well as searing in high temperatures, depending on your settings.

Among the cons associated with this grill, however, is that in a bid to make it more affordable and cut down the cost of production, the manufacturers created a very thin hood for the smoker. This alters the cooking area’s insulation. In instances of sudden climatic changes, such as strong winds and cold weather, the cooking time will be extended since the regulation of heat inside the equipment is lowered.

Due to its heavy weight, Pit Boss Austin XL grill is not as mobile as other brands like Green Mountain or Rec-Tec. Its mobility is limited by its sturdy design consisting of a flame broiler, massive cooking area, and spacious hooper.

Despite being too heavy to lift, the grill has four wheels attached to each of its legs. This means that it can be transported from one section to another by being pushed. Once you reach your destination, you can lock its wheels to prevent it from moving on its own. If you are moving to long distances and you’d like to carry it along, it is advisable to disassemble it so that it fits in the vehicle you’re carrying it in.

The grilling zone or cooking area of Pit Boss Austin XL grill is among its most appealing features. It works well for people who like to experiment and enjoy happy grilling, smoking, baking, or searing moments.

Our favorite feature is its large space that enables our team to prepare different meals concurrently. Big birds like turkey can be prepared in doubles alongside each other.

Size comparison is mainly made using the grill’s ability to cook 52 burgers at a go. With that, you can estimate the size of pizzas, fish, as well as beef and pork cuts that you can comfortably prepare in the grilling zone.

Another reason why we recommend the Pit Boss Austin XL grill is its digital thermometer that is bound to give accurate readings. 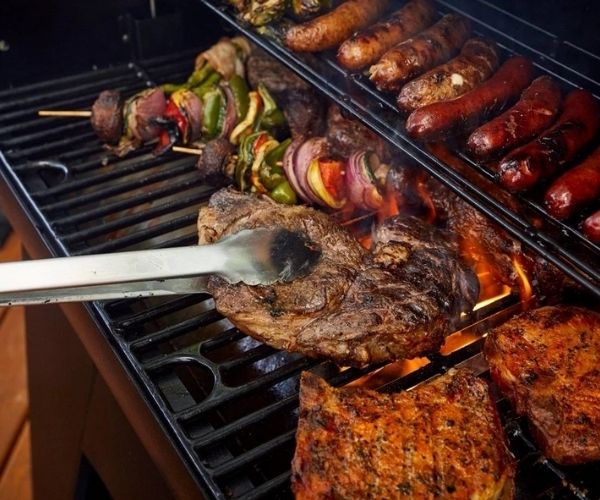 Compared to the famous series of Traegers grills, it’s disappointing that the Austin XL grill has not yet received an upgrade in regards to wireless monitoring systems and WiFi network support. We had a less exciting experience while checking temperature manually as compared to when checking it through wireless thermometers as in Traegers grills.

On the brighter side, Pit Boss Austin XL grill is fitted with two probes where meat is cooked. It is easy to keep an eye on the temperature changes to enable you to smoke or grill the meat perfectly. Unlike most grills, this one can maintain the set temperature from the beginning to the end or until you adjust it.

This keeps the food constant in terms of flavor absorption, time that’s taken to achieve the desired doneness, as well as the meat’s texture.

When properly maintained, the Austin XL grill can give you long-term service. The manufacturers have issued a warranty of 5 years, proving that they are aware of its longevity.

Its sturdiness can be compared to that of the Yoder YS640, also a high-quality pellet grill.

Another factor that contributes to the grill’s durability is the lid’s copper painting. This prevents it from rusting, melting under high temperatures, or getting corroded. The painting makes the grill attractive and can be a conversation starter.

The Pit Boss Austin XL grill has a slightly moderate price tag. Compared to other competing grill brands such as Traeger that are in the same category, Austin XL ranks better.

Its price is well-matched with the service, value, and qualities it spots. Compared to its features, we concluded that the grill is a total bargain and worth every penny.

Not to forget, the grill comes with a 5-year warranty whereby you can order as many spare parts to replace the worn-out ones as you require.

However, the arrangement only works if the spoilage happened as a result of a manufacturing malfunction. If you tamper with it in ways that cause it to spoil, then the warranty won’t hold.

As highlighted in this context, it is clear that the Pit Boss Austin XL grill is your one-way ticket to preparing savory large quantity foods. With a cooking area as large as the one it features, nothing beats the durable and long-term functional grill. Its sturdy build makes it stand out amongst other competing brands. Also, its many benefits surpass its cons, which are easily rectifiable. These factors make the grill a worthy purchase.