So, because the recipe called for you to add some paprika to your meal, you opened your spice cupboard. However, it is paprika-free.

What should you do at this point?

Fear not; it has happened to me before. How do you suppose I came to the conclusion that the finest paprika substitute in my kitchen?

What I’m trying to convey is that there is a method to finish your meal even if you run out of paprika, and if you want to continue reading, I’ll tell you all about it. 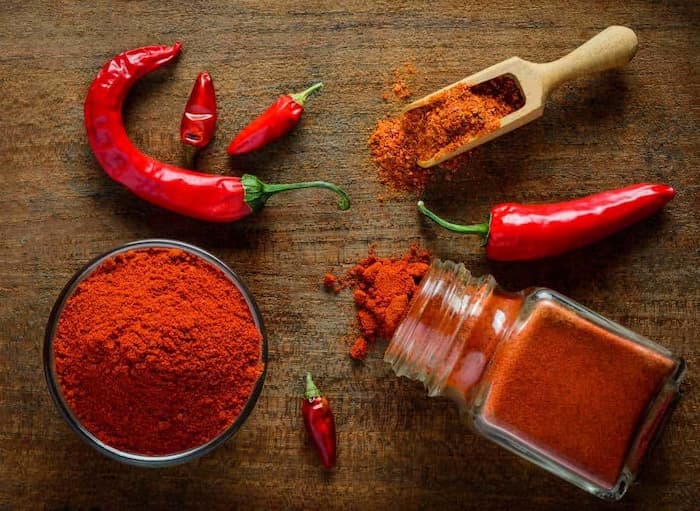 If You Have Any Of These In Your Cabinet, Your Recipe Is Saved

I’ve noticed lots of people are somewhat oblivious to the many benefits of using paprika in their dishes. For most, paprika is nothing more than a red spice with not much of a flavor that you just sprinkle over deviled eggs or potato salad, which is a tremendous understatement.

Further Reading: Can You Save Potato Salad For Longer In Freezer?

It’s one of the most common spices in kitchens around the world – if you have salt and pepper in your spice rack, you probably have paprika, as well, even if you don’t use it very often.

However, this isn’t a paprika appreciation post – we’re all here to discuss substitutes.

So, what are you supposed to do if you realize mid-cooking you’re all out of paprika?

Here are some excellent alternatives I came up with over the years:

With a flavor that’s very similar to that of paprika and a quite close heat level, Ancho powder is probably your best bet.

While it’s still chili powder in its essence, the difference between this one and the one I’ll be talking about later is that Ancho powder is a single-ingredient paprika substitute made entirely from dried sweet chilies.

However, I’m well aware that Ancho powder is not your typical spice – not everyone considers it a kitchen staple.

When used, it will give your dishes a specific smoky note, but if you ask me, that’s always a plus!

A little warning before I get into details:

Cayenne pepper is apparently not the perfect option for those of you that don’t enjoy spicy dishes.

However, as far as paprika replacements go, cayenne pepper should be one of your top choices.

While I always encourage my boys to try dishes that vary in spiciness, it’s never my goal to overdo it, so I came up with a secret recipe to turn down the heat while still getting that distinct paprika flavor.

Instead of using an equal amount of cayenne pepper as I would paprika, I cut it in half.

To make up for it, I either add some sugar (it helps bring out the flavor), or I mix it in with an equal part of Ancho or chili powder.

3. Aleppo Pepper Powder: A Substitute From The Middle East

I don’t know if it’s just me being a foodie, but I like to keep my spice rack filled with spices, both standard ones, as well as those that are considered “hard to find.”

That’s how I discovered Aleppo powder could jump in as a paprika substitute – I wanted a more complex flavor, and on the spur of the moment, I grabbed Aleppo pepper instead of paprika.

And let me tell you something:

I was not disappointed. 🙂

Heat-wise, it’s somewhere between paprika and cayenne pepper. The flavor, however, is an entirely different story – it has a certain tomato-like tang, a bit of an earthy vibe, with some smokiness to it, as well.

All in all, a complex flavor, but it can work as a paprika substitute just fine. I’m pretty sure non-foodies won’t even be able to tell the difference.

Just make sure to take into account its coarse texture.

Chili powder is a well-known kitchen staple and a decent paprika substitute. Why wouldn’t it be?

Made from powdered hot chili peppers, it’s pretty close to paprika, but with one principal difference:

While paprika is a single-ingredient spice, switching to chili powder means you’re ultimately making a transition to a multi-ingredient one.

There’s one thing you should be careful about when using chili powder as a paprika substitute, though, and that’s the overall flavor of your dish. Here’s the thing:

You can give it a try, but I can’t guarantee you it won’t impact your dish with its earthy flavor.

Speaking Of All Things Spicy, Check Out My Canned Chili Recommendations

If you’re running low on every spice I’ve mentioned above, you can try this homemade paprika substitute – all you need are some bell peppers. Just don’t tell me you’re all out of bell peppers, as well, because at this point, we’re pretty much running out of options.

All jokes aside, here’s how to make your DIY substitute:

So, What’s The Best Paprika Substitute?

All of the paprika substitutes mentioned above were, to some extent, a result of my fun, little kitchen experiments. I’ve said it plenty of times before, and I’ll say it again:

You won’t know if it works until you try it yourself.

So, don’t be afraid to experiment a bit now and then.

But before you opt for a particular paprika substitute, take a moment to consider why the recipe call for paprika in the first place. Is it just for the pop of red color, or is it for the taste?

Once you’ve figured out what the recipe requires, the process of choosing an adequate paprika substitute will be a piece of cake.

Which spice do you usually use as a replacement when you’re out of paprika?

Let me know in the comments – maybe I left something out.

Don’t judge; it happens to the best of us. 🙂

Italian-born parmesan cheese is well-liked for its sturdy texture and lengthy shelf life. You need to know how to properly preserve parmesan cheese because it is sometimes offered in large quantities and is practically impossible to eat all of it at once. This article will discuss how to determine whether your parmesan cheese is safe…

Mangoes are well-liked fruit that is prized for their distinct flavor and juiciness. It can be eaten whole, in salads, as juice, or made into jam or preserves. Mangoes have the advantage of being simple to prepare and complementing other fruits nicely. Mangoes, like other fruits, are perishable. You should consume it when it’s still…

Are you and your fellow foodies playing a game? Or perhaps you’re attempting to improve your home cuisine by using some novel and surprising ingredients, or what other meal begins with “U”? Why not give some of these dishes that begin with a U a try? Some of the unique and delectable meals we have…

Do you need a food thermos that you can fill with healthy food or snacks for the school lunch for your child? Or do you need one which you can use to carry your homemade food to work and thus eat healthier and save money? We have reviewed and tested a variety of thermoses and…

Water is a daily need and also the most important for the human body. You can quickly get water anywhere; however, you have to be very careful before drinking it. You must always seek for clean, germ-free water for improved health and hygiene. Your water’s alkaline content is safe as long as the quality is…

Since figs are so delicate and susceptible to spoiling, it’s easy to ignore their many health advantages. For those who know how to keep both fresh and dried figs, this is no longer a worry. So, what’s the best way to keep figs fresh? Dried figs, in contrast to fresh figs, may be kept for…