Due to their enormous size, people can’t help themselves but wonder what do ostrich eggs taste like and how many portions can you make using only one egg. I had tasted ostrich egg when I got it as a gift from a friend of mine who used to have an ostrich farm.

At first glance, I was amazed at how big it is and how thick its shell is. I still remember the day the kids were confused and asked how big is the chicken if the eggs are that big. The egg was unfertilized, and so as the culinary expert I am, I had to try and cook it. 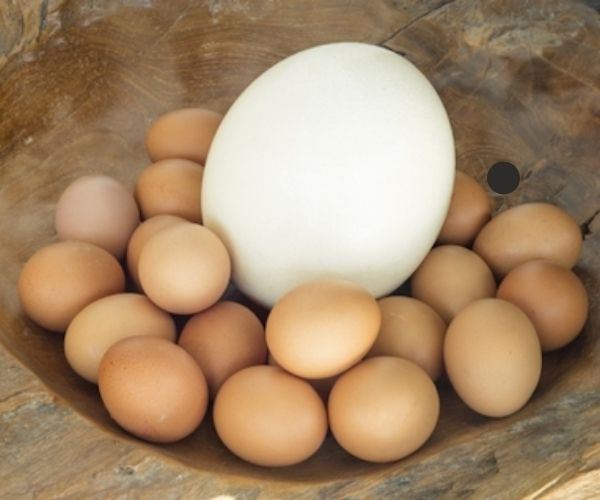 The largest eggs are those of the ostrich, weighing between 3.5 and 5 pounds. One ostrich egg is equivalent to 24 chicken eggs when compared to chicken eggs. One ostrich typically produces 40 to 60 eggs each year.

They act just like chickens. They are laid on by the mother ostrich until they hatch. However, they will need incubation if they are reared on a farm. Compared to other eggs, their shell is thicker. You get the impression that you will need a hammer to smash it when you hold it in your hands.

Is the Taste a lot Different?

Ostrich eggs do taste a lot like chicken eggs. But you will notice the difference. They have a more buttery taste and are a bit more intense when compared to other eggs. Some even describe it as kind of sweet but gross at the same time.

Personally, I didn’t find it gross at all. I just wasn’t used to its taste and texture. I tried cooking it in all the traditional ways. I would do a chicken egg. Scrambled ostrich egg resembles gelatine a bit, when boiled, it seems a bit more solid than the chicken egg. Boiled ostrich egg has the most similar taste to chicken one, and if you want to boil an entire egg, you will have to cook it for half an hour!

Ostriches are known for their health benefits and good nutritional facts, their eggs especially. On average, one egg has around 45% fat, 47% protein, and almost 2000 calories. Just like chicken eggs, ostrich eggs have a lot of B12 vitamins, riboflavin, and folic acid.

When completely compared to chicken eggs, ostrich eggs have more iron and magnesium, but they have less vitamin E and vitamin A. They are also low in sodium, which makes them a great choice for people on diets and athletes.

Athletes often choose ostrich eggs because they are rich in Omega-3, and fiber and they are the best choices for body growth due to the high amounts of calcium, zinc, and manganese.

How Can You Cook an Ostrich Egg?

Ostrich egg can be cooked like any other egg you cooked before. It can be boiled, scrambled, and fried. But take into consideration that any form of cooking will take a lot longer due to its volume.

For the purpose of getting an idea of just how much time it will take, imagine cooking around 24 chicken eggs at the same time. And because of the ostrich egg’s thick shell, they need a bit more time to be cooked and some extra steps in preparation.

To crack the shell, you will need some tools to do it. I use a kitchen hammer, but some people like to see the top off, so they can serve it inside of the shell and make an entire presentation with it. I advise you to use the hammer, it’s the simplest way to do it, and you won’t need much force to open it.

To make an omelet, you have to crack the egg’s shell first. Of course, luckily, you don’t have to crack it completely. You only need to make a small hole so you can pour it out. Hit the top of the egg with a hammer to crack the shell.

After that, you have to cut its membrane, which is not as thin as you used to with chicken eggs. Use a knife or any other sharp object to puncture it. I usually use a pointy screwdriver to get it done.

Once you’re through the membrane, pour the contents into a large bowl, then beat it and cook it like you would the regular chicken egg.

Boiling an ostrich egg will take a lot of time, from 30 minutes up to 2 hours, depending on its size. There’s no need for any preparation, except to fill the large pot with a lot of water. I usually pour a bit of salt into the water with any eggs I cook, it makes the shell soften a little bit.

I would recommend you wait at least an hour before you try to open it. When the egg is cooked, the shell should be softer than in its original state. You can use a spoon to crack it open and a straw to cut the membrane.

This will probably be the most challenging cooking method for ostrich eggs you will experience. I had a bit of trouble when I tried to do it because I couldn’t determine how big will it be in a pan. So, the number one tip I can give you is to get the biggest and deepest pan you have.

The next challenge you will face is to keep the yolk intact. When you handle such a big egg, you can easily break the yolk. Don’t use a hammer this time, take a knife instead and tap the top part of the egg.

Pro Tip: In my experience, it’s best to use a boning knife and use its weight gently to crack the shell.

Tap it in a circular motion, and when you notice the crack, carefully lift the shell and pour the contents into the pan. Fry it like you would fry a chicken egg.

And that concludes my introduction and experience with ostrich eggs. If you get used to their different taste, you will benefit much more from them than your regular chicken eggs. They are a much healthier option.

Try them out, and I’m positive you will like them!