I’ve been cooking with canola oil for a while now, mixing it in with a few other vegetable oils since I’m sure it doesn’t matter.

It’s just another vegetable, and my guys thought my food was just as great as always, so it can’t really matter that much, right? Well, a buddy of mine stopped by the other week to sample some of my amazing fried rice, and that’s when I discovered that there may be a big difference between the two.

Is Canola Oil The Same As Vegetable Oil

The first thing she asked, before even tasting the food, was “What kind of oil did you use?” – and I honestly couldn’t tell her until I looked at the bottle I grabbed from the shelf.

It turns out it was canola oil this time, so she refused to eat. At the time, she told me about how canola is not even a natural plant but a man-made one, which might cause all sorts of issues.

She had to go pretty soon, though, but that left me concerned, so I decided to dig deeper by myself and ask some different people about the subject. After a few weeks, I think I have the answers to some of the more common questions concerning this…

What Are Canola Oil And Vegetable Oil Made From? 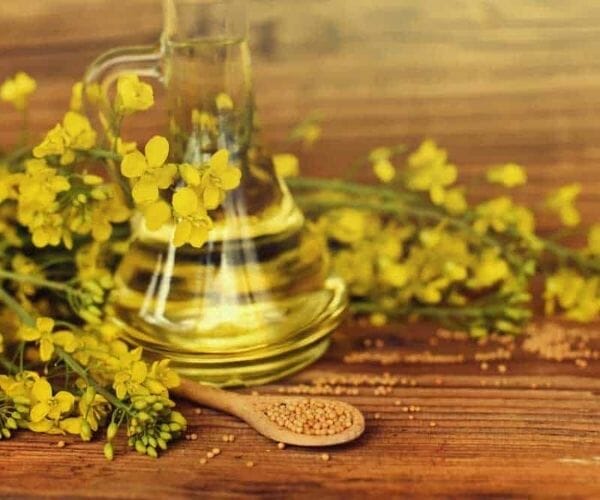 You could pour a bottle of canola oil into a bottle with a vegetable oil label, and no one would be able to notice it at first glance.

However, what those two oils are made from is actually quite different.

Moreover, canola is not a naturally occurring plant – it’s a hybrid of rapeseed plants, made artificially in Canada, and often genetically modified.

What does this mean? Well, for starters, it means the plants are more vulnerable to disease and insects and are treated with more chemicals than most other crops.

Because of that canola oil might cause problems for some of the more sensitive people.

There are other possible drawbacks that come with all products made from GMOs, but that’s a completely different kettle of fish.

Further Reading: Which is the best Olive Oil Sprayer?

Which One Is Better For Cooking? 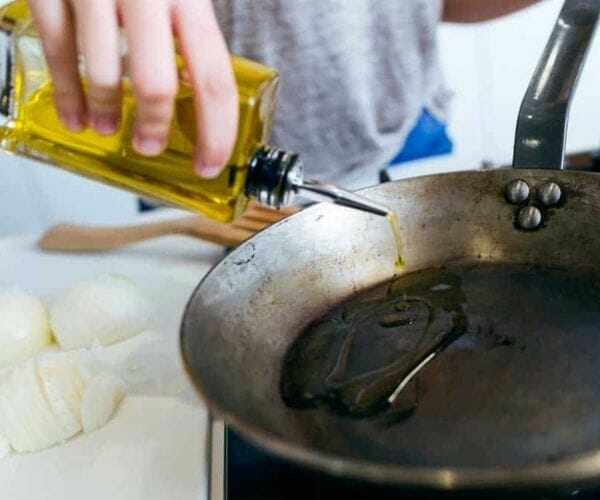 This is a difficult question, as both are pretty much odorless and tasteless, and work great for either frying, cooking in the oven, or baking.

You can use them while making a juicy meatloaf or frying an omelet, it doesn’t matter. They can even be used in salads, as they’re light in taste and texture so they feel very smooth in the mouth.

However, there are things canola oil can be used for that other vegetable oils cannot. The secret is in the smoke point. 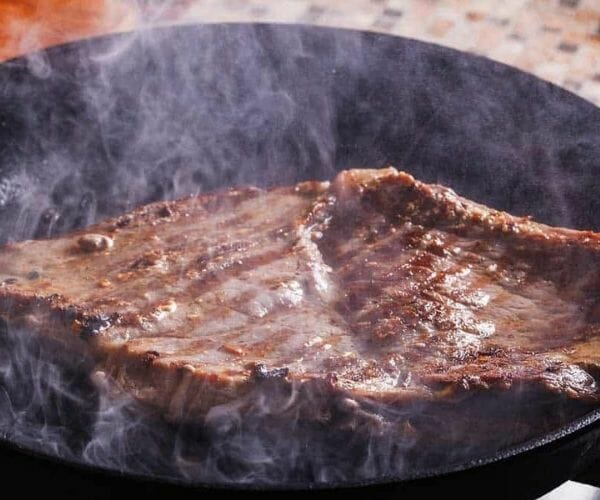 Well, that’s rather simple – it’s the temperature at which oil (and lard or butter, for that matter) stops simmering and starts to smoke. This is important not only because you don’t want your kitchen to be full of smoke – there are nutritional implications as well.

See, when oil reaches the smoke point the fats in it start to degrade and release free radicals and acrolein, as well as turning its saturated fats into harmful trans fats.

In addition to that, it also ruins the taste, especially when it cools down.

In that way, canola oil is simply more versatile. Since it has a higher smoke point it can be used in more dishes that require higher temperatures to make, without any risk of it smoking.

For example, it can be used for stir-frying, while most other vegetable oils cannot.

Of course, there are oils with an even higher smoke point than canola oil, as well as lower, and you should be wary of that when you use them for cooking.

Which One Is Healthier – Canola Oil, or Vegetable Oil?

There Are A Few Things You Need To Consider Here. For Starters, The Nutritional Values:

See also: How to Choose an Olive Oil Dispenser

Both oils are good for getting vitamins E and K and have no carbs or proteins – but the real difference is in the fat. Not only does canola oil have far less saturated fat than vegetable oil, but it also has a better distribution of Omega-3 and Omega-6 fatty acids. 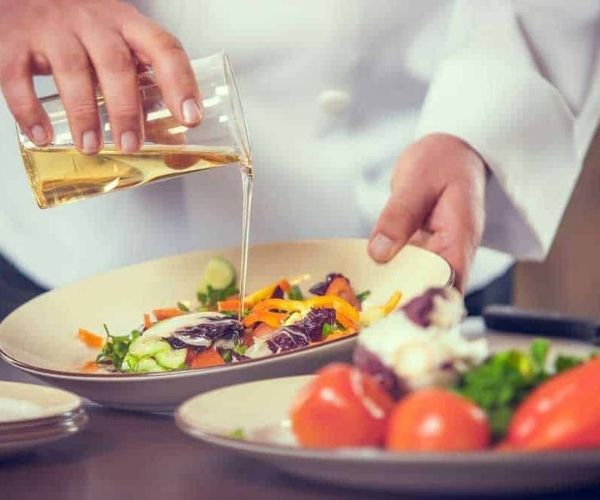 While both of those are actually good for you, taking too many Omega-6 compared to Omega-3 can be harmful. The ideal ratio is around 2:1, which is present in the canola oil. Additionally, a lot of the Omega-6 acids in vegetable oil are refined, and most of the benefit is lost in the process.

So, on the surface, canola oil seems healthier for you.

But it’s not all good – there are also some concerns about the way canola oil is made.

Namely, different chemicals are used to extract the oil from the seeds, since it’s more efficient just squeezing them. Some of these toxic chemicals may remain in the final product, in different amounts.

Moreover, heat is involved in the process which tends to lead to the good fats in the oil turning into trans fats in the process. After that, more chemicals are used to remove its odor through a process known as ‘deodorizing’.

There is more, but I can’t fit everything into this article, so you can read more about it in the resources at the bottom if you wish. This process might be necessary, but I find it a bit disquieting. However, there are canola oils that have gone through a different process, involving cold-pressing, and are usually labeled as such.

Canola oil that is non-GMO has also been labeled as “organic”, so you could just buy those variants if you have some concerns about all of this.

I’ve learned a lot by researching this topic. First of all, now I know that canola oil is definitely not the same as vegetable oil. Not only is canola oil fuller of health benefits, but it’s also usable in a wider variety of dishes than regular vegetable oil. Overall, it just seems better.

However, I’ve also stumbled across some concerning information about the possible harmful effects of canola oil which I’m not certain about.

That’s something you might have to look into by yourself as well, and there’s plenty of good information on the subject out there. Still, I think I’ll keep using canola oil, but not like before. I’ll be more selective – not just with using, but with buying as well.

If you’re concerned, I think that’s the right thing to do. So I’ll just buy canola oil labeled as organic and cold-pressed and it should probably be fine. More importantly, all of this taught me to be more careful when picking my ingredients in the future.

I hope you will find all of this pretty useful when picking your oils and ingredients, so you don’t end up being as careless as I was.

Good luck with your future cooking! 😉

I use balsamic vinegar a lot these days. In countless recipes I have called for it, and even when a recipe does not require balsamic vinegar in specific, I still tend to add it as it is super healthy and has a delightful aroma. Now that you know how often I use it, you can…

You could be asking whether red chili flakes and red pepper flakes are the same things, and if not, which is preferable. Red pepper flakes are available in jars at almost every pizzeria, and chances are you’ve sprinkled some on your pizza, food, or drink at some time. But do you understand what red pepper…

Does that large bottle of ketchup in the refrigerator take you months to complete it? It makes sense why most of us choose to purchase larger bottles of ketchup even though we typically only use a little amount of it each time. However, you might be concerned about whether it can spoil and how to…

Sticky or glutinous rice is a particular kind of rice that is quite a staple in various Asian countries such as Bangladesh, China, India, Indonesia, Japan, Korea, Vietnam, Thailand, and others. This kind of rice generally does not contain any gluten. It becomes sticky after you cook it, hence earning its name. If you’ve tried…

Toaster ovens are the ideal kitchen appliances for preparing quick, simple, and frequently even healthful meals. One glance at our stove or the large oven makes it seem like there is a lot of effort to be done just to prepare one simple dinner. Waiting till the oven gets hot enough in particular Toaster ovens…

Adding whipped cream to any recipe from desserts, cakes, ice creams, cold and hot drinks, to fruit salads can make it creamy, decadent and delicious. This versatile ingredient can turn any dish from ordinary to something truly special. However, most recipes require very small amounts of whipped cream, whether homemade or store-bought, which means that…