Bacon, ah. It has been around for a while, and most people either love it or loathe it. There are several health myths about bacon, some of which blame it for creating high cholesterol, being fatty, and serious health issues. While some of these may be partially true, most are exaggerated. If you use it sparingly, bacon is a great addition to your diet and is said to provide a number of health advantages.

Bacon has several health advantages and is a rich source of protein, B vitamins, selenium, and other minerals. Learn more about the various health advantages of bacon, how you may profit from it, and how to utilize it to your advantage in the following paragraphs. 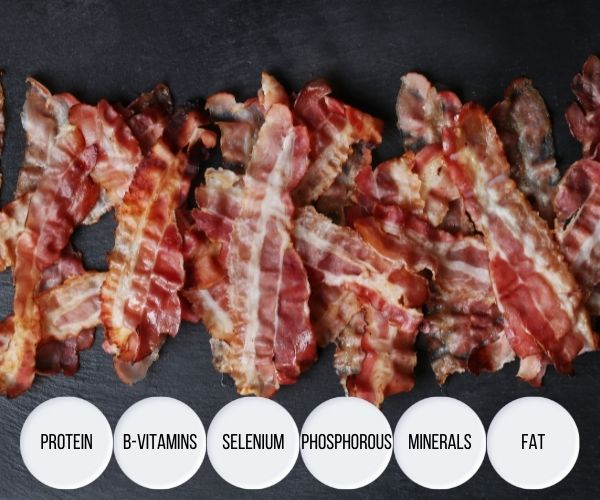 Bacon is meat, and there are multiple nutrients that your body needs found in bacon. Your body requires these nutrients since it doesn’t naturally produce them, and that alone should be proof enough that bacon is good for you. Some of the essential vitamins and minerals found in bacon include:

There are about 37 grams of animal protein in every 100-gram portion of cooked bacon. Your body needs protein to aid in cell and bodybuilding. Somebody parts that benefit from bacon include your hair and nails. Your body also uses protein to manufacture enzymes, and red blood cells, among other benefits.

Bacon contains various B-vitamins, including B1, B2, B3, B5, B6, and B12, which control some of the essential operations in the body. A deficiency of these vitamins can reduce the function of vital organs such as the heart, kidney, brain, and liver.

Some B-vitamins, such as Biotin (B7), Niacin (B3), and Pyridoxine (B6), help in breaking down fats and carbohydrates used during digestion. Others like Folate (B9) and Thiamin (B1) are involved in vital processes such as creating neurotransmitters, DNA replication, and cell division.

B vitamins are also involved in fighting anemia and supplying the body with energy levels. In addition, they facilitate the movement of nutrients through the circulatory system, so their deficiency can cause complications and affect normal bodily functions.

Selenium and zinc are essential minerals and antioxidants needed for good health. Selenium helps reduce the risk of heart disease and cancer, helps maintain the health of your brain and the thyroid gland, and boosts the immunity system. It also helps your body fight health problems and maintains your overall health. Without antioxidants, such as Selenium, your cells can break down faster and compromise your health.

Phosphorous is also another useful and necessary nutrient that your body needs. It makes up 1 percent of the total body weight and is involved in forming teeth and bones.

Bacon contains small amounts of minerals, such as magnesium, potassium, zinc, and iron. These are essential metals used in multiple vital processes, including red blood cell formation and oxygen transmission, nerve function, and regulation of muscles.

One of the things used against bacon is that it contains fat that can adversely affect health. Although bacon does have fat, it doesn’t have harmful fats. For example, it doesn’t contain trans-fats which are the most dangerous form of fat. Bacon contains less fat than many people attribute to it. BaconToday.com’s Boss Hog says that bacon contains less fat and cholesterol than other cuts of meat, such as chicken and beef.

Bacon has a lower fat content compared to its nutritional value. It is an excellent addition to those keeping a high protein diet and can be used as a protein supplement after exercise due to its high protein to-fat content.

Bacon is a Source of Omega 3s

Omega 3 is a fatty acid commonly associated with nuts, flaxseed, and oily fish. Omega 3 is known to reduce the risk of stroke and heart disease, help with depression, and reduce Rheumatoid arthritis symptoms when taken in healthy quantities.

Bacon is one of the best sources of Omega 3 oils. However, you need to be careful with your bacon intake because modern pig feeding practices have changed the content of these fatty acids, increasing the content of Omega 6, which is unhealthy.

Bacon Can Improve Your Mood

Scientific studies have shown that an amino acid deficiency can cause common mental disorders like bipolar disorder, depression, obsessive-compulsive disorder, and depression. Your body creates neurotransmitters like dopamine, serotonin, and noradrenaline that help with improving mood, and the lack of them is one of the common symptoms of clinical depression.

The body uses amino acids to create these neurotransmitters, and so it needs foods rich in amino acids, such as bacon. These foods are part of a way to treat depression symptoms, among other treatment programs. Bacon is a natural mood enhancer known to encourage a positive mental state, which helps in the elevation of moods.

It also causes a happy effect after eating, just because of the sheer taste, which improves satisfaction and lowers stress levels. While bacon isn’t a cure-all for all mental illness and depression symptoms, it is a great way to enhance your mood, even for a short amount of time. And remember to always take it in moderation.

Choline is an essential nutrient, meaning you need it as part of your diet since your body doesn’t create it naturally. It is primarily found in meat and eggs.

Memory loss, odd behavior, and death can be caused by problems developing in the brain, and that is why choline is needed in the body.

Bacon contains choline, hence eating it improves brain health, reducing the rate of memory loss over time. It is also used to treat certain mental impairments, such as dementia and Alzheimer’s. Taking choline through bacon or other similar foods also contributes to faster cognition speeds and helps keep your brain healthy.

A Finnish study done on around 2,500 Finnish men shows that the risk of dementia was 28 percent lower in those with a higher intake of dietary choline than those with a lower intake.

How to Deal with the Health Risks of Processed Meat?

Bacon is processed meat, and nutritionists are concerned that a high intake might increase the risk of acquiring heart disease or cancer. While there are dangers of eating processed meat, these studies are biased since they are done on people who lead an unhealthy lifestyle.

Bacon is a healthy and staple food in most low-carb diets, including the Ketogenic diet. This is because bacon has a high amount of sodium which is desirable in diets that don’t contain a lot of carbs.

However, processed bacon has a lot of dangers attributed to it. This is due to unhealthy pig feeding practices, and the manufacturing process which takes away some of the most needed nutrients. Processed bacon can include higher doses of fat and take away from the essential nutrients that your body needs, making it unhealthy for you.

Another way to get healthy bacon is to find healthy sources if you don’t want to make it yourself. Some people suggest going to pig farms directly, while others choose to go to vendors they trust. If you choose to go down this road, ensure to look at what processes these suppliers use and learn all you can about the health benefits of their bacon before you buy it; to ensure you get all the needed nutrients.

Related article: How Long can Cooked Bacon Sit Out?

Bacon is a fabulous food with multiple benefits. However, it can also be unhealthy when not taken in moderation. Keeping bacon as part of your diet is a great way to improve your general health, as it comes with multiple valuable nutrients and healthy brain-preserving choline that helps in the boosting of your immunity. Nevertheless,  it also contains unhealthy fats, sugars, and salts, hence you need to take it in moderation. Learn how to balance your bacon intake to get the best of its healthy fats, vitamins, and minerals.

Nothing compares to the creamy texture, and acidic and sweet flavor of Southern-style coleslaw. It is a delicious side dish that is inexpensive and simple to make. It makes a great summertime topping for pulled pork sandwiches, barbecued ribs, or any other smoked, grilled, or barbecued meat. Here is a step-by-step tutorial for preparing the…

If you have a griddle in your backyard or are planning to buy one, you must already be excited for all possible varieties of foods that you can cook up. Before you start, however, it can be a good idea to season the griddle with some oil (while also carrying this out regularly once you…

Grill tongs are indispensable for any pitmaster. They will allow you to handle safely and flip your burgers, steaks, turn skewer, shuffle vegetables on the grill without burning yourself and without dropping or piercing the food. A good pair of grill tongs should provide a comfortable and stable grip and should keep your hands and…

Assuming you already acknowledge seasoning as an important step before putting your smoker to use but don’t exactly know how to go about it, you’re just the audience we’re looking for! We’re here to educate you on all the benefits this act has to offer, but more so precisely on how to go about it…

Smoked pork shoulder is a great meal you can have on a hot afternoon with your favorite drink. Later on, at night, you can shred it and eat it with pasta or mashed potatoes. The leftovers can be sandwich filling for your breakfast. This is how diverse this cut of pork is. For the best…

Do you often have trouble deciding whether your grill is hot enough and ready for searing those beautiful steaks or grilling the mouthwatering burgers? You may use an infrared thermometer to avoid guessing and the requirement to touch the surface of your cooking surface. These kind of thermometers provide instantaneous and precise temperature measurements from…