Liquid smoke provides a substitute for creating smoke when barbecuing or smoking meat. Despite the criticism from the BBQ community, liquid smoke comes in handy for people who don’t have a means of ordinarily creating smoke. 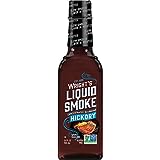 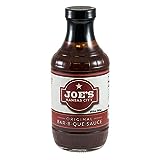 Its main aim is to give the meals a smoky flavor. It may not be similar to smoking in a smoker, but the meat comes out with the intended smoke flavor in it.

The inventor of this type of smoke is known as Ernest Wright. He reached this decision after noticing a black solution at the side of the stovepipe in a print shop. This black liquid dripped out whenever the stovepipe was heating.

He concluded that the dripping liquid was produced as a result of mixing smoke and cold air. The two condensed to liquid form. Ernest decided to carry out further experiments using the combustion of wood and fire exhaust condensation.

The first liquid smoke was manufactured in 1895. It is known as Wright’s Liquid Smoke and is available for sale up to date.

The Process of Making Liquid Smoke

Equipment such as cooling tubes is used to collect smoke in its liquid form. Impurities such as soot, ash, and others are filtered out before the liquid smoke is packaged.

The by-products of burnt wood are water vapor and smoke. The two then come into contact with the air in the atmosphere and cool down, turning into liquid. Large-scale production of liquid smoke involves burning a lot of wood.

A debate on whether liquid smoke is safe to use on food has been ongoing for a long time. Liquid smoke is a product of solid smoke, put under adjusted conditions. This means that the properties of the two types of smoke have a lot of similarities.

Compounds such as Polycyclic Aromatic Hydrocarbons (PAHs) are present in both liquid and actual smoke. Consumption of these organic compounds in high measures can lead to negative health effects since they are carcinogenic.

It is advisable to use only small amounts of liquid smoke, enough to produce the required taste. You should also avoid using liquid smoke regularly.

How is Liquid Smoke Used? 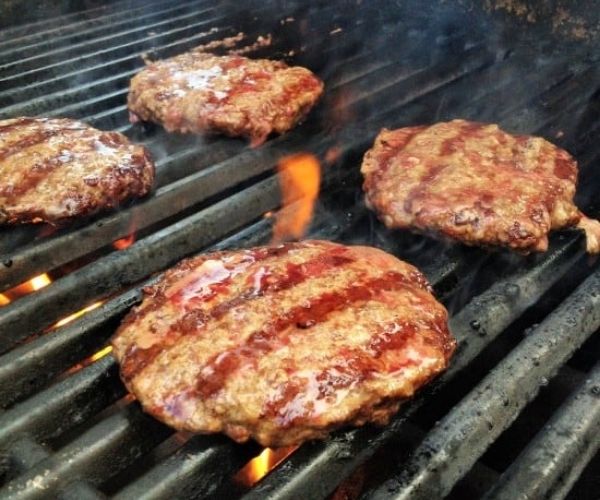 Using liquid smoke gives your food a smoky flavor without having to pass it through a smoky fire. You don’t have to own a smoker or gas grill to achieve this flavor.

If you have come across any marinades or sauces labeled ‘barbecue’, high chances are that liquid smoke was added when manufacturing them.

Other foods that have the ‘smoked’ label on them are likely to contain liquid smoke as part of their manufacturing components.

Liquid smoke is sprinkled or brushed over food that needs to achieve a smoky flavor. You can add it to cheese, sausages, poultry, pork, or fish. These foods can be cooked before or after the addition of liquid smoke.

Due to the high concentration of the smoky flavor in liquid smoke, a few drops are all you need to get the right taste. You can add it to marinade or seasonings. It can also be diluted using barbecue sauce, apple cider vinegar, or other liquids in line with the recipe.

Liquid smoke may be used in a variety of different recipes. These smokes may be used for a wide variety of purposes, not just smoking meat. Delicious with a liquid smoke flavor is chicken sauce, cowboy beans, shellfish, and butternut squash.

Here’s an example of a recipe that uses liquid smoke:

The above recipe can accommodate 5 servings. It can be adjusted to suit the number of people on the table.

Another way to use liquid smoke is to cook the meat first using the other ingredients, then coat it with liquid smoke when it is ready to be served. The smoky flavor can be tasted in every piece of beef steak from the recipe above.

A similar recipe can be used for grilled pork, salmon, chicken, and cheese. Another ingredient that can be introduced to the recipe is apple cider vinegar for the liquid-smoked pork chops. Wine braising would also give the beefsteak an added flavor.

Liquid smoke is also used for side dishes such as greens and baked beans. These dishes are consumed alongside barbecues or other meat grilled traditionally.

Desserts such as cookies and chocolates can also attain smoky flavors by adding drops of liquid smoke to them. It gives them an added complementary sweetness.

Liquid Smoke Brands and Where to Buy Them?

Liquid smoke is derived from actual wood smoke as discussed earlier. This means that different types of woods such as hickory, pecan, mesquite, and applewood among others, are burnt to produce the smoke.

The liquid smoke flavor varies from one type of wood to another. Below are different brands of liquid smoke to choose from:

All types of liquid smoke have a shelf life of six months after opening. Read through the ingredients carefully so that you purchase the liquid smoke whose flavor is suitable for your taste buds.

Liquid smoke of different brands is available in many local stores. They can also be purchased online and delivered right to your doorstep.

Liquid smoke is easy to make and you can do it on your own. It is more advantageous compared to industry-manufactured liquid smoke. This is because you have control over the ingredients you prefer.

A grill or smoker comes in handy for this project because you’ll need to burn wood inside them. Collection of actual smoke is made easier by either of the two because of the chimneys attached to them.

You’ll also need wood chunks or chips. You can use mesquite, hickory, oak, or any other type of wood, depending on the flavor you desire in your liquid smoke.

Soaking the wood before the activity guarantees adequate smoke. The water on the log also adds to the flavor, giving it an aquatic enrichment.

Black or smoked tea is made by drying tea leaves over a fire. Wood from natural pine is used for this activity. Brewed tea, therefore, is a great alternative to liquid smoke and can be used for similar purposes.

Another substitute for liquid smoke is smoked paprika. It is a spice created from smoking paprika using Oakwood. Smoked paprika provides a chilly and smoky flavor to food.

Like paprika, jalapenos are burnt over a wood fire and then ground into chipotle powder. The smoky flavor can be tasted in the food it’s added to.

Liquid smoke is gaining popularity in the spices market. Despite receiving criticism from the barbecue community, this type of smoke adds the same flavors to food as actual smoke.

The best part is that it can be stored for future use, which is not the case with solid smoke. The latter can only be used once and you have to light a fire again to acquire it.

Try making it yourself following the provided guidelines and offer your meals that well-deserved smoky flavor.

Although smoke is a necessary component of grilling, you might wonder if different types of wood actually impart distinct smoky aromas and characteristics to the meal. Is it really worth thinking about finding the ideal match between a certain meat cut and the wood you use for smoking it? Some devoted pitmasters devote their full…

The summer is almost here, and this means that outdoor parties are coming! We can all agree that no one wants a warm drink on a hot day. Having a patio cooler is a must if you are planning on having a remarkable gathering. And what can be cooler than a cooler? If you are…

Joe Traeger is the person who invented and built the first pellet stove and quickly patented his product. Thus Traeger Grills became the company that held the monopoly in the pellet grill production and market from the 1980s to 2006 when the patent ended. Since then, there have been many companies that have been targeting…

Creating the perfect backyard barbecue can be a challenge. The built-in gas grill is an ideal solution if outdoor space is limited or if there are safety concerns about having propane tanks on your property. There are many models of built-in grills on the market with different features and benefits; we will help you find…

Only rock ‘n’ roll may rival meat as one of the terms with the broadest meaning in language. It’s like hearing a guitar for the first time and then learning that there are innumerable variations of rock ‘n’ roll, from ska to djent. Meat also comes in a variety of colors;) I should start with…

If you are a committed meat eater, you should get the ideal smoker thermometer as well to ensure the success of all your meat-smoking endeavors. Although anyone who has ever read a few of my writings may easily infer that about me, I have previously admitted to you that I am a meat sort of…