Yesterday I had to throw away food. I detest it when this occurs.

Recently, our home was a mess since the boys were struggling to adjust to their new school routine and John was busy building a new bar with chairs. You know the drill: cooking, tidying up after the “handyman,” running errands and attempting to maintain your sanity.

I haven’t thought about the dish of spaghetti bolognese leftovers I put in the refrigerator throughout this “wonderful” time. The odd stench eventually made me think of them after four days went by without anybody in the house opening it.

When it occurs, there is nothing you can do to stop it; by the time you realize it, it is too late.

I set out on a study expedition to learn everything I could about spaghetti storage and storage timeframes. I’ll give you some advice and expertise I gained since I don’t want you to make the same error I did.

How Long Does Spaghetti Last In The Fridge? 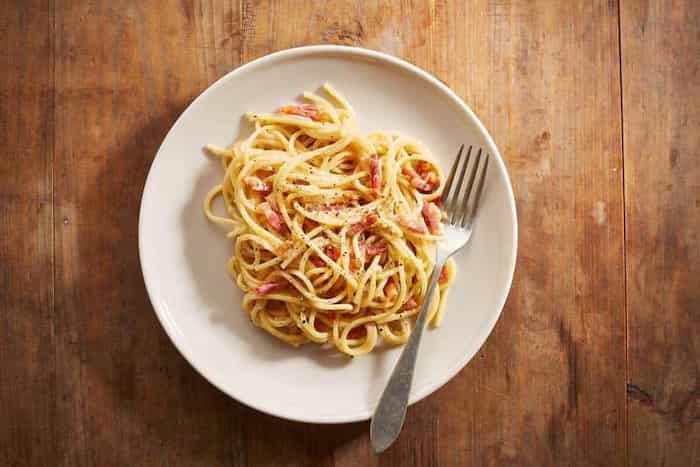 It all starts with the dish itself.

When cooking for a hungry family, it’s advisable to care about the amounts and potential waste. But, when you’re in a mess, errors and mishaps simply can’t be avoided.

The ideal situation would be to have a meal with your family and scrape the bowl until the last bit of food is out. But sometimes we just make a bit more so that we don’t have to mess around making more food later.

– “There is spaghetti in the fridge, John, just reheat it!”

*finally time for myself*

But, in these situations, the risk of not having them is quite high, and you end up with a lot of waste and a “delightful aroma” in the fridge you’ll have to get rid of later.

Ideally, you want to avoid storing perfectly edible spaghetti. It’s better to ring your neighbors and bring them the leftovers instead of keeping them because the taste of reheated spaghetti isn’t the same.

You’ll be a good neighbor at the same time and avoid issues. 🙂

If you still kept them in your fridge, read on.

So, how long can you keep spaghetti in the fridge? 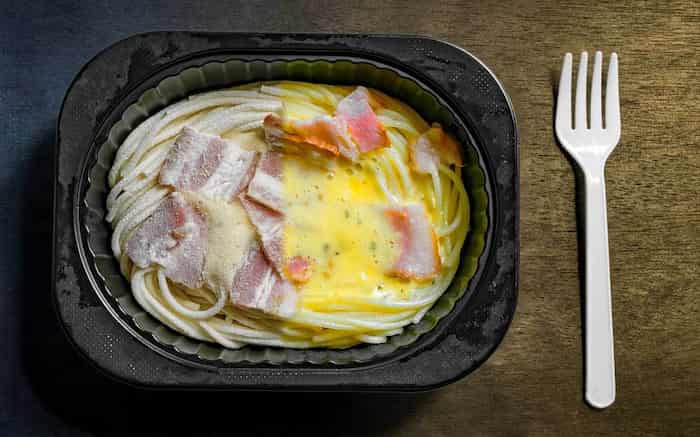 If you’ve made a meaty spaghetti dish, the estimated time of freshness is around three days.

The non-meaty dishes can withstand four days of fridge life, but that’s the maximum duration.

Even an hour beyond this point will make them bad and potentially risky for your health.

When your meal is done, and you scoop the leftovers from the table, the fridge must be their destination. If you plan on consuming them in the following three to four hours, then it’s ok to keep them standing in the pot or saucepan.

If they stand out for more than three hours, the quality starts to lower quickly, and they could be spoiled in the following couple of hours.

If you’re aware that no more spaghetti will be consumed that day, make sure to put the meal in the fridge as soon as possible. The quicker you refrigerate the dish, the longer it will preserve its quality.

Again, it all depends on your meal’s ingredients; if you have more sour-based sauce, the meal can stay in good condition longer. Milk-based cream and mayonnaise as segments of the sauce? These meals will start getting spoiled faster.

When talking about where to put spaghetti in the fridge (you know your refrigerator has different temperature areas, thus different efficiency for different food types), the upper shelves are the best option for your leftover spaghetti.

The reason behind this is the temperature and air circulation; the already prepared meals don’t synergize with the colder parts of the fridge well. Don’t place your leftover spaghetti in the drawers – that is the worst area of the fridge for delicate meals.

Small Update: While writing this, I realized my older son actually moved the pot with spaghetti from the top shelf to the lower section, so he could reach and grab some cans. Oh, great.

Storing spaghetti to preserve for reuse 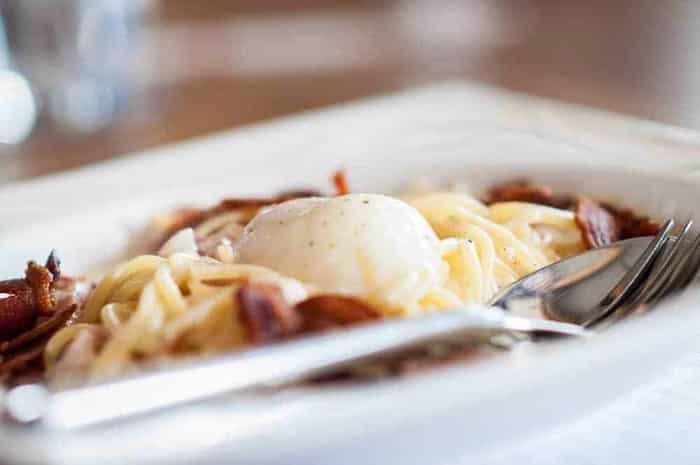 When storing spaghetti, two things should be on your mind: moisture and air.

If possible, you need to put the spaghetti in the airtight container and separate the mass into batches if you have a lot. The reason behind this is in the heat. The big chunk of spaghetti will stay warm longer and will attract more air and generate more moisture.

On the other hand, I’ve talked about sauces and meaty spaghetti meals and what they will look like after a while. Not a good scenario.

If you don’t have airtight containers (although I’d highly recommend you to have these, they are practical for various uses), sealable bags are the next best thing. You can even press the excess air out of your spaghetti, and preserve them for a longer time.

Here’s an additional tip: add a bit of olive oil to the spaghetti before storing.

That will help the strands not to stick together while being stored in a cold environment.

Combined with a proper container or sealable bag, this is the greatest practice for storing spaghetti for later use with the least chance of spoilage.

If you’re using sealable bags, shake the spaghetti & oil mixture a bit to allow good coating. This will help in the long run with the sticking and overall structure of the strands.

Also, make sure not to toss the warm spaghetti in the sealable bag. Wait for spaghetti to cool down (at least 30 minutes or more based on the amount) and then start packing them for the fridge.

You May Need: Make The Perfect Home-Made Pasta

If by any chance you want to extend its storage life, you’ll have to reach for the extreme measures – the freezer.

This environment can preserve your spaghetti almost indefinitely – if you keep the spaghetti frozen (at least under zero degrees F). Still, it’s recommended not to keep them forgotten or frozen for longer than two months. Inspect your freezer from time to time, ladies & gentlemen!

Thawing your refrigerated (or frozen) spaghetti 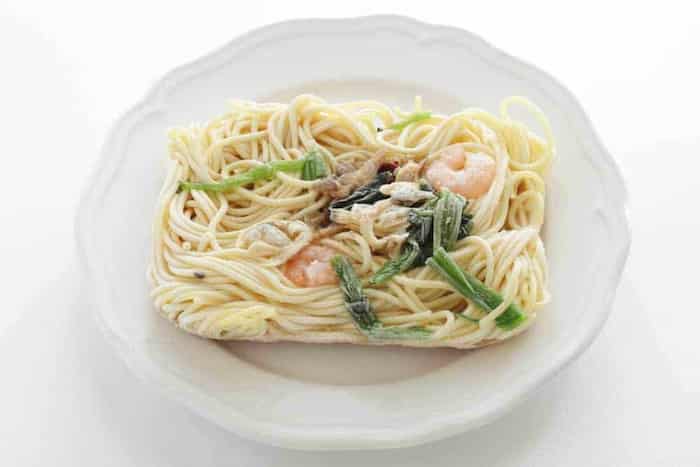 Now we’ve come to the part of discovering your (hopefully still in good condition) spaghetti.

It’s time to thaw and use them without (probably) discovering they’re not good anymore. If you followed my instructions so far, your spaghetti would be in good condition, I’m sure.

Thawing the refrigerated spaghetti can be done with hot water or a microwave.

I recommend the first option because refrigerated spaghetti loses a portion of its moisture in a cold environment. Furthermore, they will be bland and mushy – the difference is how much (with one to two days of storage slightly, with three or four days significantly).

So, make sure to put your spaghetti in the boiling water (with a bit of salt) for around 30 seconds, and get them into a colander. It will be enough time to get them ta good condition and temperature for use.

Reheating in the microwave works as well (plus, it’s easier) but will result in a lower quality end product than water thawing. Make sure to sprinkle some water to retrieve some moisture, and stir them up vigorously before the process. Use the reheat setting on your microwave and set it for one minute longer than prescribed.

As you’ve already guessed, I recommend going for the first method. The reason for this is simple; the microwave will thaw the strands too quickly, killing a lot of nutrients in the process. The strands will be mushy and tasteless.

The slow process of setting them up at room temperature (or placing the bag in hot water) is way slower but won’t damage the food on a cellular level, making your spaghetti much more nutritious and tasty.

This all relates to spaghetti without sauce or meat.

Reheating the spaghetti dish you pulled out from the fridge can be done in the microwave, but make sure not to do it for too long. Use one of the lowest settings and keep it short.

Here’s a small technique of mine I use to reheat spaghetti dishes:

Further Reading: How To Storage Mushrooms In The Fridge? 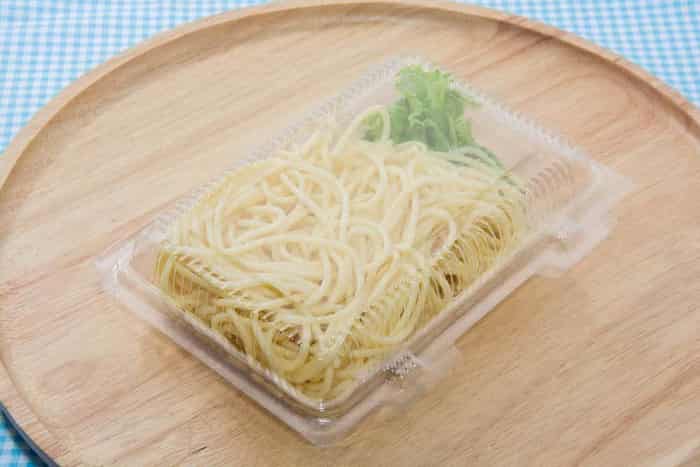 There you have it, folks.

This is how long spaghetti can last in the fridge or freezer if necessary.

Here are the five main takeaways from today’s post:

I’ll see you again and until then, enjoy some beautiful spaghetti, please!

Did I mention how much I detest February? My bellowed Patriots lost this month, and as usual, nearly everyone in the family was ill. It was a terrible start to the month for me. You wouldn’t believe me, but I’ve been caring for my sick boys and husband for my third straight February. Viruses or…

What is orange and sounds like a parrot? I bet you have all guessed it right away – a carrot! If you ever cooked a meal in your life, you know how important carrots are – there is simply no cooking without them! Buying carrots is a must whenever I go grocery shopping, but nevertheless,…

Glass dishes shatter very easily, so people prefer either porcelain or ceramic when looking for new dishes. They are not unbreakable, but they are certainly more durable than glass dishes. Ceramic is made using clay and heated to solidify it. It is a very versatile material and makes for visually striking dinnerware. Since we rely…

Who does not love potato salads? As a quintessential side dish, it adds a yummy dose of umami to any meal! A potato salad is a dish that is made from boiled potatoes and other ingredients. Given that it frequently goes with the main meal, it is commonly regarded as a side dish. It is…

My interest has always been cooking, even as a little child. My mother, grandparents, and aunts helped me learn how to cook the best meals at first because I just liked eating them. I finally acquired the technique when I was around seventeen years old and was prepared to make anything I want. 🙂 However,…

How long will the leftover meatloaf from last night stay fresh in the refrigerator? Depending on how you save information, the answer to your query may change. Refrigerating the meatloaf as soon as you can after cooking it is the greatest approach to guarantee that it will stay tasty for as long as possible. According…