Are you wondering why steaks which are advertised as dry-aged are so much more expensive than fresh or wet-aged steaks?

And is it worth paying more for dry-aged steak as compared to unprocessed or wet-aged meat?

Read on to find out more about dry-aging vs. wet-aging meat.

Dry-aging beef is a technique that has been used for centuries for tenderizing the meat and for enhancing its flavors. It is done by hanging the meat at a cold temperature for weeks or months.

Wet-aging is a much newer technique, which includes vacuum packing and sealing the fresh meat, which is usually done for a few days, mostly until the fresh meat is transported from the slaughterhouse or butchers to the customer or store.

As a faster and easier method, wet-aging is much cheaper than dry-aging.

The main purpose of aging the beef cuts or carcasses is to make the meat tenderer and thus more flavorful.

The connective tissue and muscle fibers in meat reduce in length as it ages, making it more appetizing and easier to chew.

Before being prepared and cooked, all meat can benefit from maturing, mostly because when an animal is killed, its muscles stiffen owing to rigor mortis (postmortem rigidity).

Most cattle can go through rigor mortis in a period of 6 to 12 hours.

This process can be slowed down and minimized by cooling the recently killed carcass, but the meat still has to be matured to remove the hardening of the muscles and make it more delicate.

The enzymes in the animal’s flesh will start dissolving the hard connective tissues and muscle fibers after either dry or wet age.

This process of breaking down can take from a few days to weeks and even months.

Depending on the technique used to age the meat, the resulting texture and taste will vary quite a lot.

Here are some of the main differences between the two methods and the results from each of these processes. 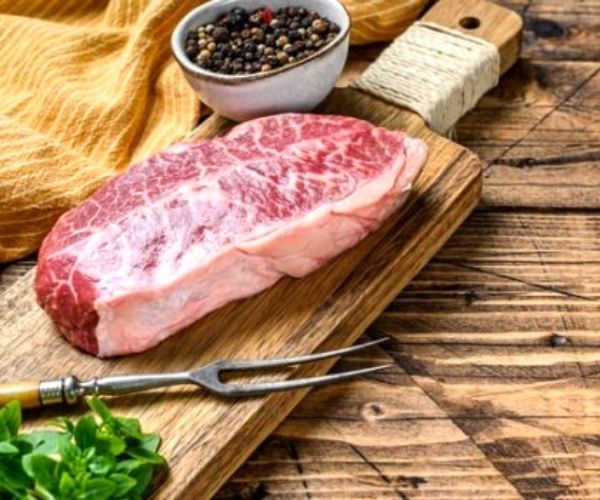 Wet-aging is a much newer technique that has become increasingly popular and which allows the meat producers to save money and time for dry-aging the meat. Wet-aging involves the packaging and vacuuming of the meat shortly after the slaughter.

This allows for the meat to age while it is transferred to the stores or customers.

The airtight packaging promotes the enzymes to break down the connective tissue and the fibers without the loss of moisture and without the spoilage of the meat. This means that the meat does not lose as much of its volume during the wet-aging, thus making the yield higher.

But just like there is a difference between fermented and pasteurized cheese, the flavor and texture of wet and dry meat can be vastly different.

Many fans of wet-aging claim that there are certain cuts that can benefit from the wet-aging, such as the thinner and leaner ones, as the process helps prevent the beef from drying out. 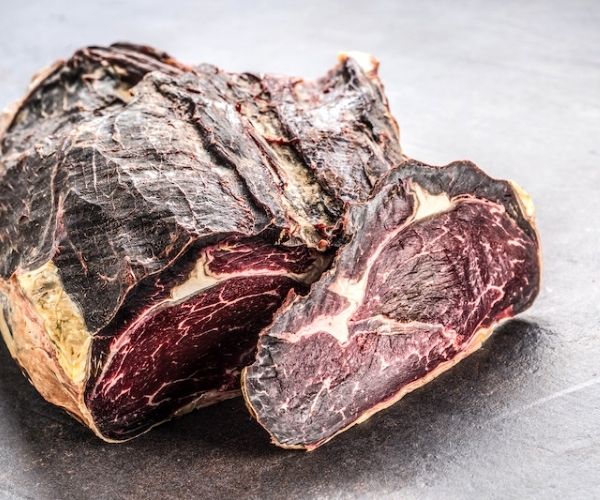 Usually, when beef is dry-aged, the primal cuts or whole sides of the carcass are hung in rooms or areas with temperatures that are just about freezing and are left exposed to the cold air.

This process will allow the enzymes and the naturally occurring microbes to break down the protein and fat in the connective tissues and muscles into fatty acids, sugars, and amino acids.

This is a process that is similar to that of fermenting cheese and which helps improve the texture and the flavor of the food.

During the dry-aging, the beef will lose about 70-75% of its moisture content. This results in the meat developing a richer and beefier flavor.

Typically, the longer the meat is dry-aged, the stronger its flavor will become and the tenderer it will become.

But at the same time, the volume of the meat will shrink during the dry-aging as it will lose a lot of its moisture and because the surface needs to be trimmed during and after the process.

This reduction of the yield after the dry-aging and the time, space, and equipment needed for the aging are the main reasons for the increase of the price per pound of dry-aged meat.

The dry-aged beef is preferred among foodies who don’t mind paying more for a richer flavor and a more tender texture of their steaks.

Then again, some people perform the dry-aging of meat at home, using some basic equipment such as a dedicated refrigerator, an electric fan, a baking sheet with a wire rack, or even dry-aging bags.

How to choose between dry-aging and wet-aging?

Which one is better depends on the specific meat cut, the breed of the animal, the taste of the consumer, and the available budget.

Whether the flavor of dry-aged or wet-aged meat is better depends on your personal preferences.

While some people prefer the meatier taste of dry-aged beef steak, others are not fans of this rich beefy taste.

Then again, in some cases, wet-aged meat can have a more intense sour flavor due to the vacuuming, which stops any air from contacting the meat during the aging.

Without a doubt, dry-aging meat is a much more complicated and expensive process than wet-aging. It takes time, work, equipment, and storage space and also leads to a smaller yield than the wet-aging.

This is why many meat producers are switching to the time-saving and money-saving wet-aging technique. This allows for the safe transport of the freshly slaughtered meat to the butchers and stores, while in the meantime, the meat is packed and is aging.

Only some specialty meat producers continue using the dry-aging for their prime quality products.

Plus, the longer dry-aging process does make the meat tenderer and the beefy flavor richer.

Because of the moisture loss, which can be up to 75% during the dry-aging of the meat, it is essential to understand that not all cuts are suitable for this technique.

Some cuts like chuck tenders, skirts, and others tend to become overly dry when dry-aged. Some people prefer to wet-age the leaner cuts such as the filet mignon in order to improve its tenderness and juiciness.

The best cuts for dry-aging are the large muscle and the subprimal cuts of the animal, which have a thicker layer of fat and also bones that help prevent them from becoming too dry. Some of the best cuts which are largely improved from dry-aging include the ribeye and sirloin.

While trying a premium dry-aged steak on a special occasion is highly recommended, for everyday cooking and grilling, wet-aged meat is perfectly ok to use.

Thankfully, due to the growing interest in wet-aged steaks and meats, more supermarkets and stores are offering them at reasonable prices.

If you want dry-aged steaks, you will probably need to go to an artisanal butcher or buy some online from a reputable meat butcher like Snake River Farms.

Dry-aging is a much older technique that is used to vastly improve the flavor and the texture of beef. But is costly due to the time, resources, and the loss of volume in the meat, so it is not something that most of us can afford to eat on a daily basis.

On the other hand, wet-aged meat is cheaper, readily available, and helps break down some of the connective tissues and fibers in the meat until it reaches our tables.

Some meats are better for dry-aging, while other leaner cuts can benefit from being wet-aged.

Whichever you choose, we hope that you enjoy your aged steak as much as we do every time!