Blue steak, also known as Bleu, is a traditional French method for preparing steak. It refers to the steak doneness, which comes before rare, and can be hard to assimilate by people who are not used to it, as well as difficult to prepare properly by inexperienced cooks.

Blue steak is a level of doneness of the meat, which is as close to eating a raw or living cow as possible.

It is cooked for only a minute on each side over high heat and needs a few seconds of cooking for the sides.

When prepared properly and safely, the result is a soft and delicate steak that melts in the mouth.

Read on to find out how to prepare the perfect Bleu steak at home.

What is Blue Steak?

This is a level of doneness of the steak, which is less cooked than what we know as rare doneness.

In fact, the blue steak is cooked only for several minutes in order to get a brown sear on the outside but remains raw on the inside.

This type of doneness is achieved by placing the steak on the grill for only 1 minute per side and for a few seconds on the edges. The internal temperature of the meat when it is done this way should not exceed 115 degrees Fahrenheit.

According to Michelin star and celebrity chef Gordon Ramsey, the explanation behind the term “blue steak” is that the meat has a slightly bluish or purple color when it has been freshly cut. The color is caused by the remaining blood in the meat, which has been depleted from oxygen when the meat is cut.

But keep in mind that the blue color, which makes this steak doneness a delicacy in France and in some leading restaurants around the world, does not last long. Once the meat is cut and exposed to the air, it becomes oxygenated and turns into a bright red color, which we are used to seeing when looking at a fresh cut of beef.

So, you are unlikely to see this blue color unless you are present when it is actually first sliced.

What are the precautions to take when preparing blue steak?

It is perfectly safe to eat blue steak as long as it has been prepared properly and the necessary precautions have been taken.

The blue steak is safe for consumption only if it has been completely sealed on all sides and edges.

The reason is that if there is e.coli or other bacteria, it is located on the outer parts of the steak and not inside it.

By searing and cooking it on top, bottom, and around the edges, the potentially harmful bacteria are killed, and the meat is less likely to cause a bacterial infection or food poisoning.

Another precaution to take is to disinfect the grill togs by sterilizing them after placing the raw steak on the grill or skillet and before using them to serve the blue steak. This will help prevent the transfer of any bacteria from the raw meat to the cooked steak.

How to prepare the blue steak?

Ingredients and tools you will need to make blue steak 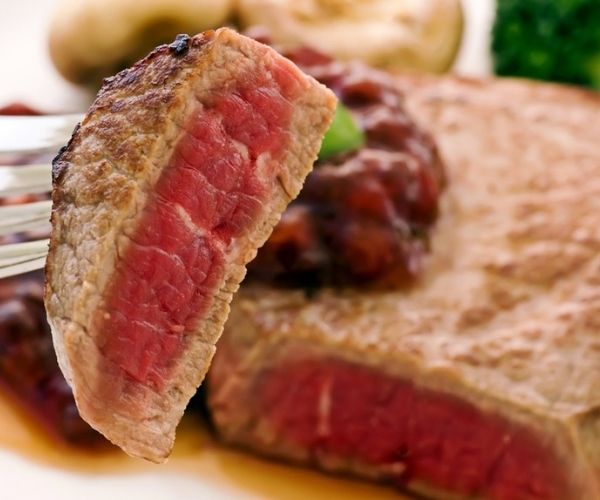 The perfect blue steak is completely seared on the outside and completely red inside, with a cold and soft center.

While it may sound a tad scary and intimidating to prepare and eat, when you take the necessary precautions and cook it properly, it is a delicious dish.

So that there is little chance of e.coli bacteria causing food illness, keep in mind to seal the whole outside surface of the steak to a brown color.

Every time the grill tongs come into contact with raw meat, you must sanitize them to prevent cross-contamination.

You may safely savor a scrumptious blue steak if these measures are observed and the steak is cooked as directed.