Most barbeque experts view the barbequing process as a form of art, which requires a lot of skill, experience, knowledge as well as intuition.

Barbequing by numbers, such as using the popular 3-2-1 method for preparing the perfect ribs, is an easy way to achieve that unforgettable taste of mouth-watering ribs and eliminate all of the guesswork during the cooking.

What is the 3-2-1 ribs barbequing method? 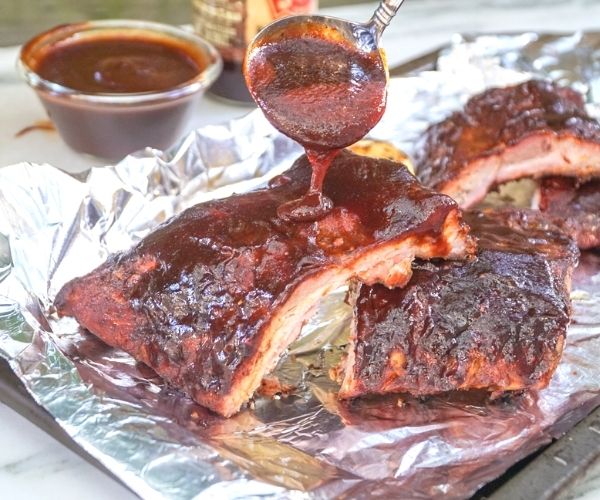 This popular method for cooking ribs consists of breaking the barbequing into three consecutive time blocks of 3, 2, and 1 hour.

The method requires a total of 6 hours, but the result is worth it, as you will end up with perfect ribs which will slide off of the bones and with a tender multi-layered taste of the barbeque, which we all love if you follow the technique as instructed.

The method is considered fail-proof when the instructions are followed closely and will ensure that the ribs remain tender and juicy rather than dry and tough.

Find out how to reheat ribs, so they remain juicy and tender

Steven Raichlen is the man who revolutionized barbequing and smoking and is an expert and author of multiple books, and TV shows specializing in BBQ and smoking.

He considers the 3-2-1 ribs cooking method an easy to use, but as he calls it, a “safe” way to barbecue ribs.

Still, Raichlen admits that it is likely that more than 95% of the people who try the ribs cooked by the 3-2-1 method will love their tender and moist texture and taste.

But according to the expert and author of multiple books on grilling, this method uses what he has condemned through the years, namely the process of boiling.

The boiling, according to Raichlen, occurs during the second time block, when the ribs are wrapped in foil with a liquid such as beer or apple cider and are left to “boil” in the liquid and their own juices.

This, according to the expert, causes them to lose part of their delicious taste, which becomes “washed-out” during the 2 hours of boiling.

He claims that the true rib experts and connoisseurs, such as the judges trained by the Kansas City Barbeque Society, prefer that the meat retains some of its chewiness and resistance, which can be felt when eating them. These experts generally do not like ribs that can be deboned with a single tug of the fingers or teeth. Plus, their complaint is that the moisture from the cooking in the foil softens the smoky and crusty bark, which is the most highly prized part of barbequed ribs by the pitmasters.

While Raichlen agrees that the first 3 hours of cooking and smoking the ribs are essential for spice-crusted ribs, and so is the last 1 hour of cooking them at a higher temperature with sauce and without wrapping to create the perfect glazing on their surface.

He disagrees with the middle 2 hours, mainly because the ribs are wrapped and practically boiled in the foil.

Instead, Raichlen recommends the 3-1-1 technique, which entails smoking the rubbed ribs at 250 degrees Fahrenheit for 3 hours in a smoker. The ribs should be smoked or grilled for an hour after being covered in foil with butter and a liquid such as ale, beer, apple cider, or another liquid. After an hour, take the ribs off the grill or smoker and brush them with an extra rub. Applying the glaze in the final 30 minutes of cooking time is recommended.

You can read the full recipe of the 3-2-1 rib alternative by Steve Raichlen here.